Each day leading up to the March 8 announcement of the 2011 NBCC award winners, Critical Mass highlights one of the thirty finalists. In a first, the NBCC is partnering with other websites to promote our finalists as well in the categories of Criticism and Poetry. Click here to read NBCC board members on our Poetry finalists on the website of Oprah.com. Appreciations of several of our Criticism finalists can be found at The Rumpus. 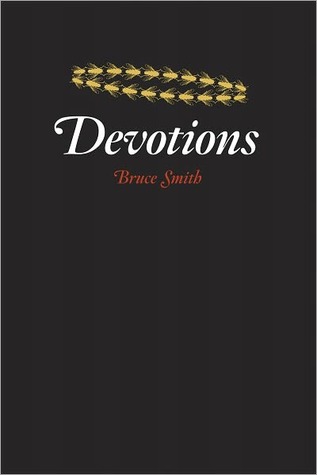 To read Bruce Smith's “Devotions” is to enter the unsettled crossroads of contemporary American poetry. It's a place where pop meets the classical, where the spiritual text meets LOL, where Paolo and Francesca might road-trip from Corpus Christi to St. Paul with overnight romps in the hay at the Red Roof Inn.

When poets work to find the conflation of American culture, they are in search of an idiom that is both intimate and extrinsic, that embraces the “mannerists and the brutalists.” For Smith, the gab on the open road he travels includes Whitman's sense of what he once called “business, politics, conviviality, and so on” alongside the declared lies of Dick Cheney. It includes the “devil's dung” and “In-a-Gadda-Da-Vida,” “methodical longing” and “crystal meth.”

This socio-Romantic vein in American poetry is territory trod by Allen Ginsberg and Frank O'Hara in the last century, for sure — and Smith, too, has wonderfully channeled the humming spasm of Uncle Sam naturalism.

“Devotions” pulls together some 60 poems — called devotions — on all manner of Americana, from the shopping malls to the jazz clubs, from the gritty to the prissy, from Providence to the unbidden. Only a poetry of reverie could unite the “ravishment, affliction, fraudulence, magnificence, anguish [and] argument” that is the hodge-podge, mishmash of this nation. Devotions accomplishes what so little American poetry does today, even attempts today: It envelopes you in a singular imagined universe of rhythm and logic and temporal form. Here, the poet instructs himself to feel only with erotic intensity (“Write like a lover” is how “Devotion: Red Roof Inn” begins), and to write a devotional poetry of crisis that is “rasping and jittering.”

The idea of devotion in this books is measurably different from an ode, though what they share is a distinct focus on a single subject and extenuated theme. Lines like the ones below are a hymn to ardency, both emotionally and literarily expansive:

We look through
smoke: a nightclub where strangers in makeup and wigs
assume the postures of devotion — prone or bound like us
inside and dark and the foreground lit as if by the single beam
of a car we are not driving. We know so much.
We know a glance is the romance of the optic nerve
and a blow at an angle so that we keep on going, an oblique
flux that follows impact.
— from “Devotions: Closer”

Finally, Smith's “Devotions” are a signature example of American poetic want, and they deserve all the praise they have received since being published last year. These poems are the best of a trend in contemporary American poetry to slang up the truth and the beauty of American decadence — including the Baudelairian membranes. To read “Devotions” is to read the “angsty music” of America spoken by a poet who has an ear to the flattop.