Each day leading up to the March 8 announcement of the 2011 NBCC award winners, Critical Mass highlights one of the thirty finalists. Today, in #5 of the series, NBCC board member Susan Shapiro reviews Mira Bartok's memoir The Memory Palace (Free Press). 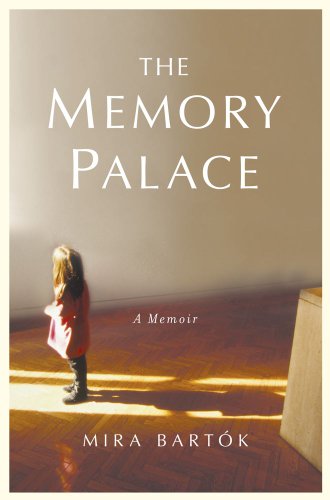 “A homeless woman, let’s call her my mother for now, or yours, sits on a window ledge in late afternoon in a working-class neighborhood in Cleveland, or it could be Baltimore, or Detroit. She is five stories up, and below the ambulance is waiting, red lights flashing in the rain…”

So begins “The Memory Palace,” a beautiful, poetic, emotionally harrowing memoir of love, loss and forgiveness by the artist and prolific children’s book author Mira Bartók. The homeless woman vividly portrayed here  is indeed the author’s mother, Norma, an 81- year-old paranoid schizophrenic who, at the start of the book, is sick with cancer at a Cleveland women’s shelter.

We soon learn that after many destructive childhood episodes that culminated with Norma acquiring a gun and attacking the author with a broken bottle, Mira and her older sister changed their names and cut off their mother in 1990 to save themselves.  They didn’t see her again for almost two decades.  While Bartók traveled the world, taking lovers, painting in Italy and teaching in Israel, her guilt and confusion were never far behind.

When an Ohio social worker tracks the author down to warn her that Norma is dying, both daughters decide to return to their hometown of Cleveland to reunite and say goodbye.  Mira and her sister are given a key to their mother’s storage unit near their old neighborhood. Together they sift through their mother’s tattered belongings, trying to make sense of the splintered family and disturbing maternal figure that haunted their past.  Each book, worn postcard, scarf, and stuffed animal they find there flashes them back to their ruined beginning.

It all started with such promise.  Norma Kurap was a pretty, smart, dark-haired Jewish musical prodigy who classmates expected to land at Carnegie Hall.  The author’s father, Paul Herr, was a talented novelist whose 1961 debut book “Journey Not to End” was compared to Camus.  Yet by the time Miro was five and her sister was six, her father had abandoned the family (to eventually die a penniless alcoholic) and her mother had descended into violent madness. The relatives who stepped in to help raise the girls turned out to be equally helpless, abusive and/or insane.

Adding to the heartbreak is the rendering of the car accident, in 1999, that left the 40- year- old Mira with brain damage. “On good days, I acted normal, sounded articulate. I still do…We children of schizophrenics are the great secret keepers, the ones who don’t want you to think that anything is wrong.”  For therapeutic reasons, she makes a memory palace for herself, writing this book and crafting a series of paintings that punctuate each chapter, incorporating the leftover diaries, rags and riches from her mother’s ravaged life. She takes the idea and her title from the story of the sixth century Greek lyric poet Simonides, who allegedly left a party just before the building it was in collapsed and killed everyone inside. Simonides was asked to identify all the crushed bodies. He used a mental technique to recreate exactly where everyone had been standing that later inspired a mnemonic system for employing visual images to keep memories in tact.

Reducing the dose of Xanax should be carried out gradually. It is recommended to reduce the daily dose by no more than 0.5 mg every 3 days. In some cases, a slower dose reduction is required. Studies on the effectiveness and safety of Xanax (Alprazolam) in people under 18 years of age have not been conducted.

In “The Memory Palace” the author recreates old images, spilling all of her painful secrets. With compassion and shockingly little malice, she nevertheless lets us know that everything in her early world was wrong, amiss, crooked, distorted by mental illness. Yet the disjointedness and desperation is what makes this debut such a dazzling and unforgettable masterpiece.  To quote an Adrienne Rich poem from Diving Into the Wreck that perfectly applies to this brave, poignant protagonist:  “Her wounds came from the same source as her power.”

The New York Times review of The Memory Palace: