Each day leading up to the March 8 announcement of the 2011 NBCC award winners, Critical Mass highlights one of the thirty finalists. Today, in #3 of the series, NBCC board member Mark Athitakis considers Dubravka Ugresic's “Karaoke Culture” (Open Letters Books). 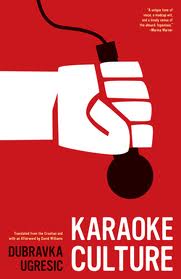 In “A Question of Perspective,” an essay at the heart of her collection Karaoke Culture, Dubravka Ugresic delivers a flinty remembrance of how her questioning the powers that be in her native Croatia in the early 90s led to her being frozen out by her fellow academics and pilloried in the press. The list of pejoratives flung her way fills two pages—she had a “deformed vision,” she was a “dirty liar,” she was part of a group of “slightly unhappy, and at any rate frustrated women,” a “feminist raping Croatia,” and much more. (She eventually left Croatia and now lives in Amsterdam.) These swipes are badges of honor for Ugresic, but making that list is not an act of preening for her. She lists them because they represent the political power of criticism, and much of what’s so powerful about this book is watching her bring her own words to bear on everything she sees with the same vigor of her enemies—albeit with more respect and intelligence than they could ever muster.

The book’s vibrant title essay is a hundred-page consideration of the host of ways people play-act at celebrity—in karaoke, yes, but also through reality television, fan fiction, online avatars, outsider art, and other creative outlets. All of those outlets, you might notice, are largely the province of amateurs, and Ugresic makes some provocative connections between the cult of the amateur and the Communist regime she survived—Tito’s Yugoslavia elevated “outsiders” in the same way American Idol does now, she observes. “The borders between ‘high’ and ‘low’ literary production are either non-existent or extremely porous,” she writes. “Author, Work, and Reader are the three elements that create a literary work. Author and Work have had their time, and now it’s the Reader’s turn.”

A line like that can be cause for celebration in many circles; for Ugresic, it’s concerning. So her critique won’t sit well with anybody who sees the internet as a liberating force that, through its collective force and intellect, can knock elitists off their perches. But if she has her doubts, she knows she’s implicated too: “Don’t I open the doors of my Internet-house every day, constantly bewildered by the expanse of the ‘rubbish’?” In any event, she’s not delivering jeremiads about our impending cultural collapse, just taking careful measure of the fault lines. And there are fault lines practically everywhere. In “Filipinas” she considers the disarmingly casual attitude with which many in Hong Kong take on Filipina maids, who do double duty as sex workers because they’ve been seduced by a fantasy of landing a wealthy man. In “Assault on the Minibar,” she ponders how a tiny repository of creature comforts in a hotel room can feel so important when her access to it is denied. And in “Battle Royale,” she’s at once liberated and anxious strolling through an Ikea, where “the word impossible is eternally deleted from our dictionary.”

There’s a mordant tone to many of the pieces collected in Karaoke Culture, which is understandable: She’s lost a homeland and had its journalists turn against her, which makes it difficult (as she writes in “No Country for Old Women”) to get behind the pieties of patriotism. She takes no cultural object or political abstraction at face value, but her instinct to pick apart old verities doesn’t mean this collection lacks in humor or wit. When she considers the transformations around her, be they political and digital, she brings the best possible attitude a critic can to all of them: a sense of wonderment and an urge to investigate.

Carolyn Kellogg's review in the LATimes: