Each day leading up to the March 8 announcement of the 2011 NBCC award winners, Critical Mass highlights one of the thirty finalists. Today, in #4 of the series, NBCC board member Mary Ann Gwin reviews John Lewis Gaddis' “George F. Kennan: An American Life” (Penguin Press). 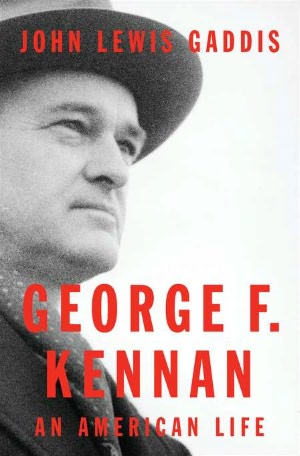 The best biographies teach signal lessons about the mysteries of human nature. Here’s one of my favorites: even great men and women are to some degree, as we all are, at war with themselves.

“George F. Kennan: An American Life’ by John Lewis Gaddis, is the story of just such a conflicted man, an American diplomat who by turns inspired, exasperated and appalled his superiors, never held high office and hated the necessary insincerities of the diplomatic trade. And his brilliant strategizing arguably kept the Soviet Union and the United States from going to war with one another in the chaotic years after World War II, pulling the world back from the brink of nuclear destruction.

Gaddis, a distinguished Yale historian, began work on this biography in 1982. His task ended thirty years later, after Kennan’s death at 101. He builds a portrait of Kennan as a man with the soul of a poet, the instincts of a master manipulator and a temperament ill-suited for the diplomatic service that he served in for a good portion of his life.

George F. Kennan was a child of the Midwest. Born in Milwaukee in 1901, he had an unremarkable childhood, though marred by the death of his mother shortly after his birth. He went to Princeton, where he was lonely (a lifelong theme). His first piece of luck was to pass the formal examination for the Foreign Service and enter it in the chaotic years between World War I and II. The second: he met and married Anna Elisabeth Sorensen. Annalese, as she was called, was Norwegian; her common sense, humor and stability anchored the marriage, as the Kennans produced four children and endured the rigors of a diplomatic life spent all over Europe and the Soviet Union (their only real home was a farm near a town with an eerily prophetic name – East Berlin, Pennsylvania).

Kennan entered the Foreign Service in 1926. Posted to Switzerland, Latvia and Berlin, he studied Russian history and politics. The young diplomat  wrote this early description of the diplomatic game: Diplomacy required “a facile tongue, unhampered by any sincerity, you must have a great capacity for quiet, boring dissipation…you must have an  utter lack of conscience for the injustices of the world about you and not the faintest intention of ever doing anything about them; you must, in fact, be able to rid yourself of every last impulse to distinguish between right and wrong.” (89)

In 1933, when the U.S. opened diplomatic relations with the Soviet Union, Kennan accompanied the first ambassador to Moscow, and there his real education in the dark intricacies of Soviet politics and power began. His ringside seat on Stalin’s purges would inform his view of the Soviet  Union for the rest of his life, as Russians he and Annelise knew personally began to drop from sight, consigned to exile or execution.  He was serving in Berlin in 1941 when World War II started. His internment for six months by the Germans was another stark lesson in the exercise of brute power.

After the war, Kennan had moved to a spot as deputy head of the Moscow mission under Ambassador Averell Harriman. In 1946, in response to a U.S. government request to explain Soviet behavior, Kennan sent his famous Long Telegram (5,500 words), in which he outlined his prescription for the U.S.’s postwar stance towards the Soviet Union (the ambassador, fatefully, was out of town).

The “Long Telegram” responded to the prevailing view of the time, that the Soviets (the U.S.’s allies in the war) needed to be treated gently; that warm regard would be returned with good will and cordial relations. To assume this, Kennan warned, ignored Stalin’s world view and political strategy – the dictator needed an external enemy to joust with to enforce his draconian regime within. Stalin would remain ruthlessly antagonistic and seek every advantage against the West. The way to deal with him was what would become known as “containment,” pushing back whenever Stalin pushed forward, without actually resorting to a catastrophic war. “If the United States demonstrated resolve whenever Moscow made threatening noises; if it extended aid to the European democracies, so that they would know who their friends were; and if it otherwise tended to cultivation of its own garden there was no reason to expect World War III,” wrote Louis Menand in a New Yorker review of Gaddis’ book.

A tricky business, but the “containment” strategy became the basis for the Cold War. In the early days, Kennan was in the thick of it. His views caught the attention of Truman’s secretary of the navy, James Forrestal, who arranged for Kennan to teach at the War College. While there Kennan composed his second manifesto, an article titled “The Sources of Soviet Conduct” written by “Mr. X” for Foreign Affairs magazine, expanding on the Long Telegram’s themes.“Mr. X” was quickly unmasked, and Kennan’s star in the halls of influence rose higher.

As a result, for a brief but pivotal time, Kennan became perhaps the U.S.’s key thinker on postwar strategy. Under Secretary of State George C. Marshall, Kennan belonged to the department’s highly influential Policy Planning Committee, running it for a time as director. Under Marshall and at Kennan’s direction, the group hammered out the Marshall plan, the massive postwar aid to Europe plan that became the template for European recovery. Their position papers often went straight to President Truman and became policy shortly thereafter. Kennan became “not just the State Department’s but the nation’s top policy planner,” Gaddis writes.

Kennan fell out with Marshall’s successor, Dean Acheson. His formal diplomatic career effectively ended when, as Ambassador to Moscow in 1952, he made a comment linking Soviet treatment of the diplomatic corps (bugging of offices, enforced isolation, relentless “shadowing” of diplomats by the secret police) to that of his treatment by the Germans during the Second World War. Kennan was declared persona non grata by the Soviets and left, his diplomatic usefulness ended. Annalise was relieved; she was afraid the Soviets were planning much worse. For himself, Kennan had asked (and received from) two suicide pills from the CIA in case he were incarcerated and tortured.

For the rest of his life Kennan, from his post at the Institute for Advanced Study in Princeton,  functioned as an outsider, a critic of both contemporary American culture and U.S. foreign policy. He opposed the creation of NATO and the partitioning of Germany. He had a deep fear of the nuclear weapons buildup. He exasperated Washington policy makers with his outrider comments on their strategy, but they continually overrode their pique to seek his advice, as president after president called Kennan in at key moments of tension with the Soviets.

Kennan was a fabulous writer – his books on Russian history and Soviet policy won two Pulitzers and two National Book Awards. He was able “to filter a diplomat’s observations through an artist’s eye, a historian’s ear, and poet’s emotions,” writes Gaddis. (325) He wrote passable poetry (the old-fashioned rhyming kind). He played the guitar. He lived an austere, almost 19th century life during weekends at his East Berlin farm, which he compared to the one in Chekhov’s “The Cherry Orchard.” He confided in his journals (which Gaddis had full access to) of his struggles with the rivers of self-doubt and loneliness he swam in every day.

Af age 54, Kennan predicted that he had perhaps another ten or fifteen years of active life. He lived to the age of 101, long enough to see the Soviet Union crumble (just as he had predicted) and the stockpile of nuclear weapons greatly reduced (just as he had hoped for).

In a recent New York Times essay on the book, former secretary of state (and National Security Advisor) Henry Kissinger called Kennan “one of the most important, complex, moving, challenging and exasperating American public servants.”  Kennan may have been unsuited for diplomacy, but his containment doctrine “governed American foreign policy for a half-century, arguably prevented World War III and both predicted, and set the stage for, the crumbling of the Soviet empire,” wrote Fred Kaplan in a New York Times review. Gaddis ably documents Kennan’s achievement in pushing the world back from the brink of annihilation, and gives us a full-blooded portrait of a gifted, charismatic and complicated man.