Work is the all-American pastime, taking more and more of our waking hours, and infiltrating our sleep. It’s been grist for books from Studs Terkel’s 'Working' to Joshua Ferris’ 'And Then We Came to the End' to Joseph Heller’s 'Something Happened.'

Recently we asked NBCC members, former awards winners and finalists, What’s your favorite book about work? The responses to this NBCC Reads series poured in (a few within minutes). Books ranged all over the map. A few books gathered multiple endorsements, including Philip Levine's 'What Work Is,' Ed Park's 'Personal Days,' Tom Rachman's 'The Imperfectionists,' 'Two-Up' by NBCC board member Eric Miles Williamson, George Orwell's 'Down and Out in Paris and London,' and this novel by Penelope Fitzgerald, whose novel 'The Blue Flower' won the National Books Critics Circle Award for fiction. It's the first of our long tail, the favorite of Joan Acocella, winner of the NBCC's Balakian award for excellence in criticism. 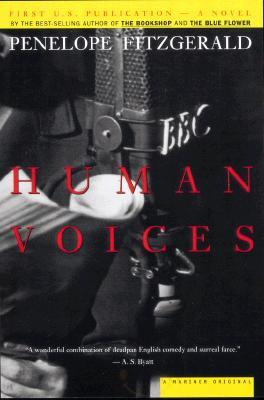 Penelope Fitzgerald's novel Human Voices, about a young woman with a grunt job at the BBC, and what she observes there. As always (or mostly) with Penelope Fitzgerald, it is very, very funny and also, at times–partly because it's funny– sad.