Work is the all-American pastime, taking more and more of our waking hours, and infiltrating our sleep. It’s been grist for books from Studs Terkel’s Working to Joshua Ferris’ And Then We Came to the End to Joseph Heller’s Something Happened, set in an ad agency circa Mad Men, which begins with these evocative lines: “I get the willies when I see closed doors. Even at work, where I am doing so well now, the sight of a closed door is sometimes enough to make me dread that something horrible is happening behind it, something that is going to affect me adversely; if I am tired and dejected from a night of lies or booze or sex or just plain nerves or insomnia, I can almost smell the disaster mounting invisibly and flooding out toward me through the frosted glass panes.”

Recently we asked NBCC members, former awards winners and finalists, What’s your favorite book about work? The responses to this NBCC Reads series poured in (a few within minutes). Books ranged all over the map. A few books gathered multiple endorsements, including Philip Levine's What Work Is, Ed Park's Personal Days, Tom Rachman's The Imperfectionists, Two-Up by NBCC board member Eric Miles Williamson, and this George Orwell classic:

An easy choice: Down and Out in Paris and London. Orwell's memoir has stayed with me ever since I discovered my father's crumbling paperback edition, in an attic closet, in high school. Here's a photo of the book: 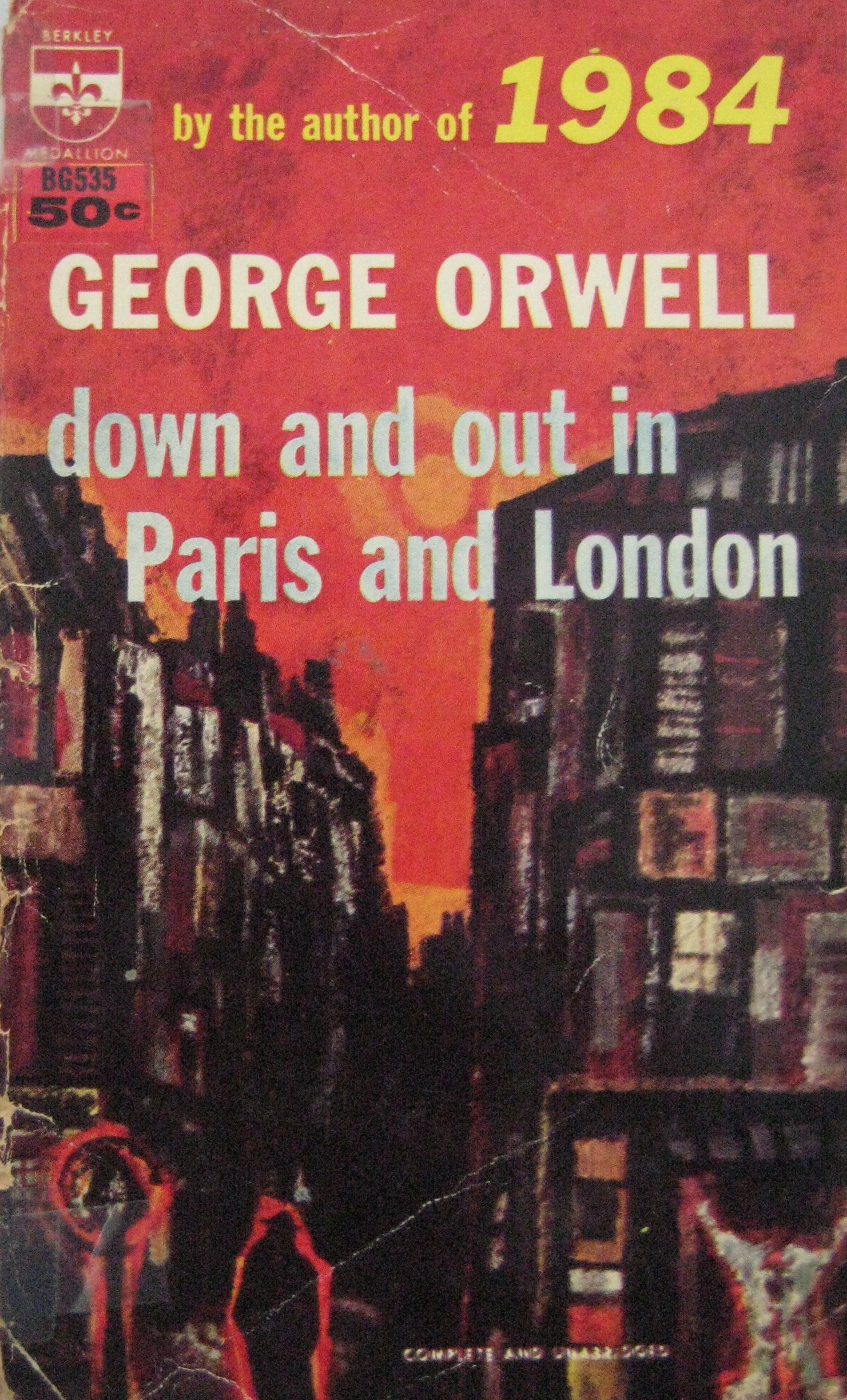 Written in 1933, the year my mother was born in France, the book gave me a visceral sense of life in Old Europe, as Donald Rumsfeld so lovingly called it. My mother was happy to leave behind a war-ravaged France; she was an unusually short woman, having been malnourished as a child, and she spoke of depleted butchers selling cat meat. But I was a pampered suburban boy, and Orwell's account of the squalid side of Paris held a lot of appeal. Ah, rampant prostitution and the glorious stench of rolled cigarettes, leaded exhaust and urine-stained alleyways!

Down and Out was also, in its own way, almost as horrific as 1984, and its stories of putting in time in vile kitchens prepared me well for my own mercifully shortlived jobs as a teenage dishwasher in not-so-fine dining establishments in the Boston area. Apart from our receding hairlines, perhaps the only thing I have in common with Jacques Chirac, the mayor of Paris and later France's president, is that we are Howard Johnson alumni (he worked as a soda jerk in the 1950s). But I doubt that Chirac's boss – unlike the little Napoleon of a tyrant who shouted out orders amid the kitchen muck at my HoJo's – regularly repaired to the hellish basement facilities. There, in sleazy “Down and Out in Paris and London” fashion, he kept company with assorted magazines, ones not made available at your local library.

And to think that people complain about cubicles.

It's been awhile, but Orwell's portrayal of his encounters with a series of grim jobs is hilarious and dark.

Down and Out in Paris and London, George Orwell: The dark side of having a job.

Moby Dick, Herman Melville. How not to be a boss. (Should be required reading for all CEOs.)

Tom Sawyer, Mark Twain. Passage on painting the fence a must!

The Bottom of the Harbor (essays),Joseph Mitchell. Hard labor made fascinating and eloquent.Collected Letters — W.A. Mozart (various editions)Mystery book: We know he was productive,but, given his social life, when did he find the time?

Book of Genesis (Old Testament) ,King James Version. Excellent for editors who must deal with delinquent authors:God made the entire world in six days: Just do it!