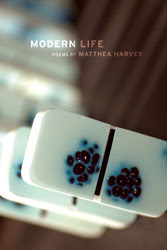 This is the twenty-ninth in a series of blog posts by NBCC board members covering the finalists for the NBCC awards. The awards will be announced on March 6, 2008, at the New School.

We ride such a cranked up tilt-a-whirl of entertainment and dread in 2008, it’s about time someone took a poetic stab at describing how strange it is to be alive. In “Modern Life,” her strange and wondrous new volume, a finalist for the National Book Critics Circle Award for poetry, Matthea Harvey has given it a fantasist’s go. Here is life in the terror age, full of gizmos and green house gases, as described by one of our fizziest, associatively agile young poets. Even when her poems fail they do so in a chunky hail shower of their own brilliance.

The molten nuclear core throwing of sparks in “Modern Life” is a series of poems called The Future of Terror. One-by-one, they riff on and refract the psychic tropes of our dangerous new world into unexpected shapes. There’s a bleak cackling irony to how Harvey goes about it. Alliteration is her buoyant, springboard into the post-traumatic psyche of America post 9/11

We ignored inoculation instructions
and read Intimations of Immortality
to the invalids instead. We couldn’t curse
the goddamned chiefs of staff
except inwardly, but would make kites
in case we ever saw the sky again.

Like Lawrence Joseph and John Ashbery, both of whom have written superior poems about America after 9/11, Harvey is a very smart poet, and like them she also knows well enough to let language do her thinking. The poems in “Modern Life” pinball from one image to the other, racking up an inner light show, a child-like dreamscape, full of horses, wooden groves, rainbows and other earthy creatures. Read these poems quickly and they feel like a storyboard to a cartoon:

No one had ever stuffed carnations
in my tailpipe or planted a symbolic
lipsticked kiss on the swingdoor
to my kitchen. When you appeared,
I knew I was in a race against the sun
before they took you away on a stretcher. (65)

The risk of this type of writing is that it becomes jive, or worse, just jibberish. Harvey keeps a tight enough yoke on her momentum to prevent that from happening most of the time. She varies forms, from prose poems to lyrics. After a series of dense, busy poems she throws in something darkly resonant like, “Do You Understand?”

No gray
rainbow
over the
blackened
land. (58)

It’s very difficult to read these poems in a political vacuum, or to describe how it is exactly that they create their magnetic fields. Their images would be provocative in peace time, sure, but as Adrienne Rich wrote in “Notes Toward a Politics of Location: “The continuing spiritual power of an image lives in the interplay between what it reminds us of – and our own continuing actions in the present.”

In other words, these odd ballads of hopelessness make very little logical sense, but they stab at the rituals of fear and fantasy that define modern life. Live with them just a while and impossibly, feverishly, they become a linguistic ear worm. Walking down the street, weeks after you’ve put the book aside you’ll find yourself humming one of their hysterical tunes.