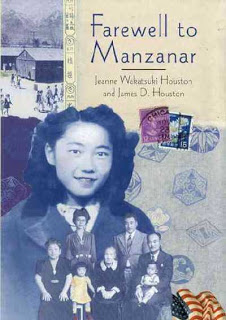 This year marks the 35th anniversary of the book we co-authored about Jeanne’s experience during the WW II internment of Japanese Americans. Since 1973 it has become a classic of sorts, used in schools across the country, with the paperback in a 71st printing, and a recent hardback re-issue.  We also take it as a good sign that the book has made the Cliff’s Notes series.  Check out the racks of yellow and black pamphlets at Barnes and Noble and you will find The Faerie Queene, then Fahrenheit 451, then Farewell to Arms, then Farewell to Manzanar.

But it wasn’t always this way.  The truth is, we had a rough time getting this book published.  The Vietnam War was in its final throes.  When Jim called his then-agent to tell him what we were working on, the reaction was, “This is going to be an issue book.”

“Is that bad?  Aren’t books supposed to be about issues?”

“This is a dead issue.  These days you can’t even get people interested in live issues.  Why?  People are issued out.  Plus, I have friends in publishing who hang around with guys in the textile business, and you should hear what they say over there about the Japanese.  In the current climate I would be reluctant to send this book around at all.”

We told him there was a difference between Japanese in Japan and Americans of Japanese ancestry.  He said, “With the people I’m talking about, that may be too fine a distinction.”

We decided to send it around ourselves.  Having published three novels by then, Jim thought he had some connections.  But after four New York publishers turned us down it began to look as if that agent had been right.

Luckily for us, a new imprint had just opened shop out here in the Bay Area – the San Francisco Book Company.  They believed the city could become a new publishing mecca, and they were looking for west coast material with some kind of national resonance.  Ours was very much that kind of story, involving 110,00 people, mostly native-born U.S. citizens, evacuated along racial lines from California, Oregon and Washington to ten desolate inland camps.

And that’s how it started.  They had a distribution deal with Houghton Mifflin, but their books were designed, edited and promoted out of the Bay Area.  A five-city tour, from L.A. to Seattle, was put together by an inspired Publicity Director named Patricia Holt, who in later later years would run the book section at the San Francisco Chronicle.  All the reviews were good.  Bantam picked up the reprint rights.  Then we collaborated with Marin County director John Korty on a television drama that became and NBC World Premiere Movie, helping to give the paperback a healthy boost.  Thirty five years later, the book is still in print