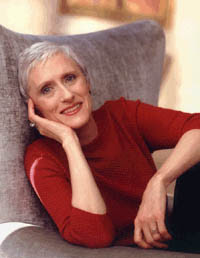 This interview, which originally ran in May last year, is the fifth in a series of blog posts by NBCC board members covering the finalists for the NBCC awards. The awards will be announced on March 6, 2008, at the New School.

SARA PARETSKY HAS BEEN worrying a lot lately. To a certain degree, this is nothing new. “I’m a pessimist by nature,” the 59-year-old creator of the V. I. Warshawski detective series says, sitting in a chair of her hotel in Manhattan.

“Some people say, the glass is half empty, some say it is half full. I say: ‘I didn’t even get a glass!’ ” Paretsky used this frisson of unease to her advantage as a novelist. Channelling her concerns over women and America’s lower classes into the hard-boiled form, she created one of the most popular, socially engaged female private eyes ever.

For almost 25 years V. I. (“Vic”) Warshawski has roamed Chicago’s South Side, turning up bodies of dead journalists (Blacklist), friends of the family (Burn Marks) and ex-hockey stars (Deadlock).

But lately, Paretsky has begun to wonder if she hasn’t stumbled upon a mystery that even Warshawski cannot solve: what the American market-place is doing to books. “I was just reading a story in The New York Times,” she says with the flat, sonorant nasal register of a lifelong Mid-westerner, “which showed how, because big-box retailers now dominate music sales, the variety of what’s available has contracted very sharply. I think we are already starting to see that happen with the printed word.

“Publishers used to take a gamble on writers who were just starting out,” she explains, “but now, they really look for the blockbuster or you are out.”

Paretsky is especially piqued by this issue because, to hear her tell it, she almost didn’t find a voice herself. As she describes in a new collection of essays, Writing in an Age of Silence, she grew up in the era of McCarthyism in a small Kansas town where, as a young girl and then a woman, her opinions didn’t count.

Paretsky’s mother was a librarian and her father a university professor; both activists with liberal attitudes on about everything but gender. They refused to pay for her schooling if she left the state.. Her role was not to be educated, but to provide.

“It took a long time for me to get to grips with this,” Paretsky says, sitting in a yoga position, her shoes kicked off. “What feminism did for me was allow me to put this in a social context outside of myself.”

Writing in an Age of Silence is her elliptical story of how she came to this understanding through social activism, age, and, mostly, reading. As she grew up bookish and dreamy, racked later by her mother’s drinking and her father’s menacing three-day sulks, she began to associate writing with resistance and breaking silence. She began to feel a kinship with writers of the Victorian era such as Louisa May Alcott. But it was the hard-boiled noir that became an escape hatch from the realities of her everyday life.

“I read crime fiction to the exclusion of everything else,” Paretsky says. The works of Dashiell Hammett and Raymond Chandler inspired her to pack up and move to New York for a botched attempt at the writing life. She ran out of money quickly, and limped back to Chicago, where she drifted for almost a decade.

Paretsky stumbled into academia, into a PhD in history and into a corporate job. She was lucky in friends, romance and healthcare, but “it wasn’t really until I was in my early thirties that I sat down and said, this is the year I write a novel. It was 1984”.

As much as Paretsky loved crime fiction, she remained determined to write something that reflected a woman’s point of view. “When I went back to Marlowe as an adult, what struck me the most was how painfully lonely Philip Marlowe was.”

As a woman, and as a feminist, she thought there had to be another way to tell a story. “So, from the beginning, my detective starts gathering a community around her of friends and mentors – so that it is a different model and fits much more into this kind of more emotionally realistic landscape.”

As a result, V. I. Warshawski became a trail blazer in the field of female-detective fiction that transcends its genre – even if Paretsky didn’t always believe in herself. “Because I’m always struggling to find a voice, struggling for courage, V. I. sort of does that for me. She becomes a mask, if you will.”

Warshawski’s adventures were adapted into a film, starring Kathleen Turner, and the social themes of her work made President Bill Clinton a fan. Now there are dozens of writers in this arena, from Patricia Cornwell to Karin Slaughter.

Paretsky isn’t just a colleague or mentor to some younger crime writers; she has also been an advocate. As soon as she began to be published, she started an organisation of reviewers who pointed out that men were some seven times more likely to be reviewed than female crime writers. “We think men might be twice as good,” she jokes, “but not seven times as good!”

To this day, Paretsky’s greatest satisfaction is not literary, but comes from the sense that her heroine has helped another woman. “I had a letter recently from a woman who is an engineer,” she says. “She said: ‘I read V. I. every morning before I go to work because it helps me deal with the harassment I get on the job’. ”

As she enters her 60s, Paretsky says it is becoming harder and harder for her to keep politics out of her books – as Writing in an Age of Silence makes clear. “I think my next book might be a book of unpublished letters to the editor,” she jokes. “I don’t know why I take all the time to write them if they don’t publish them.”

One of the themes on which she is most outspoken, which comes up again and again in Writing in an Age of Silence, is abortion. Paretsky is incensed by the Supreme Court’s recent vote to uphold a law banning late-term abortions. “Did you know that the law includes a clause that the husband or parent of a woman who has an abortion can sue her for the emotional distress caused to them by the termination of a pregnancy? In essence, the woman is the property of her parent or husband, and the loss of her fertility is an emotional distress to her owner.”

Writing in an Age of Silence points out that there have been more than 6,000 “acts of terror” committed in the past 25 years by antiabortionists. “These range from stuff like gluing doors shut, to bomb threats, to actual bombs,” Paretsky says. “There was a clinic in Cleveland where they poured gasoline on a nurse.”

In light of such things, Paretsky says, the winnowing down of the choices of what Americans can buy at their local bookstore seems small potatoes. But she worries that there is a larger culture of lassitude at work, too. “You know, coming of age in the Sixties there was so much energy among young people,” she says, aware of the nostalgia in her voice.

“I mean, there was a lot of crap, too, and you can look back at it cynically. Most people, though, were informed by a genuine desire to make changes to long-standing injustices in this country. That’s not there now.”