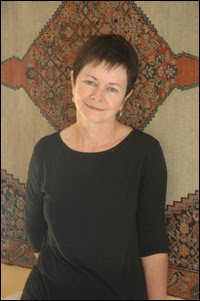 LAST WEEK, Geraldine Brooks published “People of the Book,” her first novel since winning the Pulitzer for “March.”It is a lovely, fascinating, and ultimately very hopeful story about a book (the Sarajevo Haggadah) which didn't fall through the crack between civilizations when those civilizations were busy tearing each other apart. It does not at first feel like the kind of novel one expects from a veteran of some of the worst foreign conflicts in the past ten years. I asked the 52-year-old, Australian-born, Columbia-educated, novelist and former Wall Street Journal reporter where this optimism comes from.

Q: How did you leave your overseas job with any optimism in tact? I read Chris Hedges' “War is a Force that Gives Us Meaning,” a terrific book, but one which made me feel like the overseas reporting experience must be a little like combat — one that actually makes a return to civilian life rather difficult.

A: He was much more of a front line guy than I was. When I knew him he really wanted to be in the shit. I never cared to be with the soldiers so much, I was much more interested in civilians. And I saw people behaving with the most incredible selflessness and generosity and bravery, as well as people being diabolically cruel. You never know how a catastrophe is going to affect you, whether it is going to draw out the best in you or the worst in you. I think also I left just in time because it got so much nastier, very quickly. I couldn't believe what happened to Danny Pearl, I couldn't believe he would go off to do something we all did a million times in the course of covering stories like that, which is going to see a fairly dangerous guy which, if they agreed to see you, than you were under their protection. I mean I went into the Bekka Valley to see Hezbollah, and because they agreed to see me I didn't have any hesitation. That is completely different now.

A: I don't know about everywhere, but I think the barbarity level in the beats I used to cover is just….the woman who has my job in the early years of [The Iraq] war wrote the most poignant memo that she wasn't working as a journalist anymore she'd become the CEO of a security firm, and she didn't feel like she spent her time reporting, she spent her time trying to save the lives of people working for her. I don't know: I'm glad I did it, but I'm glad I'm doing it anymore.

Q: Do you still have friends who are doing it?

A: I do, and I really admiring them plugging away…but….not me. I was sort of tempted when the Taliban fell, in Afghanistan, I thought, 'oh, boy, I know how to do that story.' But then that was just before Danny Pearl was taken, but after that I just thought, 'who are you kidding? you're not going to be taking those kinds of risks anymore.' If you can't take the risks, you won't be able to get the story.

Q: Was part of this to do with having a child?

A: Oh yeah. I really felt it was irresponsible enough being a wife, but as a mother….I really wanted to give him the kind of childhood that my mum gave me, which is one where she was around, basically. I wanted to be around for him. You know, when he goes to college, I might go back to it by then I might be on a walking frame!

Q: You can do stationary stories, the world from an unmovable spot.

A: Well, I really admire people like Martha Gellhorn, who went back very late in life, did really meaningful work. I mean, that depth of experience she had when she went to Vietnam in her 70s or something. She was my kind of role model. It was less about being with the boys, but the costs of war. I did an academic paper on her when I was at Harvard, sort of scrutinizing the way she covered D-Day and comparing it with the other coverage, and it's so stereotypical I was howling with laughter.

Q: Her fiction seemed very much to grow out of her experience as a reporter and a woman — at least that's what her biography and letters suggest. You certainly don't take after her in that respect.

A: Yeah, I still don't know what it's all about. I am a very kind of instinctive writer, I don't have any great theoretical underpinning. Sometimes I get off to go and do a course for creative writers, and I think I'm not qualified to do that: I have no idea how it works, and nothing really useful to say. I think I could do a course on how to write a magazine piece. I do think I have some nuts and bolts information on why some things work, and why others don't. The only thing I know for sure is that I agree with Philip Pullman, when he was given the Carnegie Medal he gave this unbelievably brilliant speech about why he writes for kids. He said he writes for kids because he feels that most of the adult writers approach story as if they need a pair of tongs, that if they could write books with no story in them they'd be happiest.