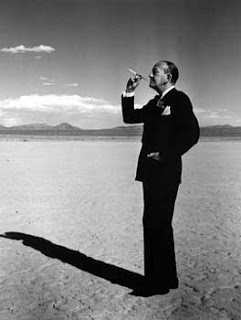 Two-time NBCC winner Daniel Mendelsohn luxuriates in the letters of Noel Coward, a man “jagged with sophistication,” (pictured left smoking a cigarette in typical desert attire) but whose letters Mendelsohn says “demonstrate the temperamental qualities—unanticipated, perhaps, by those searching here for “a very Noël Coward sort of person”—of humaneness, tenderness, and a kind of Edwardian sentimentality that.. both underlie and give emotional texture to the surface cleverness in so much of his work.”

The Guardian names 50 people likely to save the planet and NBCC winner Cormac McCarthy is one.

Words Without Borders is doing a special issue on the seven deadly sins.

Ever more complete: NBCC member M.A. Orthofer’s The Complete Review looks into Autonauts of the Cosmoroute, which was also reviewed by member Benjamin Lytal.

The release of our 2007 shortlist is just a week away, but if you’re appetite for lists needs whetting check out the The Times’ 50 Greatest British writers since 1945.

The New Yorker has a new short story by multiple NBCC winner John Updike and a poem by Sharon Olds.

Susan Stewart, who won an NBCC award for Columbarium, makes a very good case for the work of Robert Creeley.

Debuted 50 years ago this year: Wole Soyinka with his first play, “The Swamp Dwellers.”

John Berryman’s “Dream Song 29” will put you in a trance.