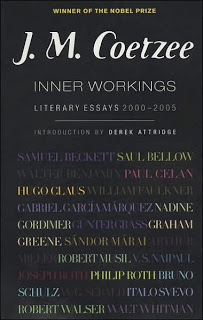 IN HIS 1997 MEMOIR, “Boyhood,”South African-born Nobel laureate J.M. Coetzee recalled the desperate passion with which he devoured books as a child. “He knows that if he wants to be a great man he ought to be reading serious books,” Coetzee wrote. “He promises himself he will soon begin serious reading; but for the present all he wants are stories.”

The younger Coetzee had no reason to fret these early habits. In three decades of publishing, the older Coetzee has established himself as a great writer – twice winner of the Booker – as well as a serious reader. “The New York Review of Books” often airdrops him into the oeuvre of European writers such asRobert Musil, Franz Kafka or Paul Celan as if he were some sort of secret critical commando.

“Inner Workings,” Coetzee's second such compilation of pieces from the “New York Review,” showcases just how well — and how seriously — he performs this role. Among Coetzee's earliest published works are translations from Dutch and Afrikaans poets, and he has retained a translator's forensic appreciation for the nuances of language, an almost scriptural regard for the primacy – and abiding mystery – of an author's intentions.