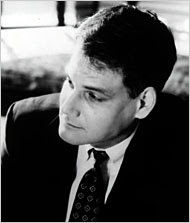 It would be hard to overstate how important the success of Falconer was to John Cheever. His previous novel,Bullet Park (1969), had received a scathing front-page notice from Benjamin DeMott in the New York Times Book Review, and sold rather poorly as a result. Cheever's alcoholism had worsened, and he'd finally ended up at the Smithers Rehabilitation Unit in April 1975—after which, sober for good, he wrote most of Falconer in a ten-month burst of joyous inspiration.

But he worried what people would make of this novel about (as he himself aptly characterized it) “a romance between a drug addict and a hustler in prison.” It would be awkward if people read the work as even remotely confessional. Cheever had been married for thirty-five years and sired three children. For the past twenty-five years he'd lived in suburban Westchester, where his best friend, Art Spear, had been a Goldwater Republican; such old friends as Spear, Cheever surmised, “would be capable of having [him] burned at the stake.”

The novel’s reception was very much in suspense, as even some of Cheever's most well-meaning colleagues had mixed feelings about it.Bernard Malamud had congratulated him on the “extraordinarily good detail” of the whole prison experience, while alluding to the curious resemblance between the protagonist, Ezekiel Farragut, and the author.Malcolm Cowley's response was similar: He thought individual aspects of the novel were “extraordinary,” but Farragut didn't “seem to [him] all of a piece.” Both writers apparently had a hard time believing that such an otherwise civilized—not to say familiar—personage as Farragut could also be a bisexual, incarcerated, fratricidal drug-addict.

At the time Cheever's daughter, Susan, was an editor at Newsweek, and partly through her influence (coupled with the ecstatic enthusiasm of their reviewer, Walter Clemons) Cheever was to be featured in a cover-story scheduled for the March 14, 1977 issue. The article would include an interview between the subject and his daughter (“A Duet of Cheevers”), for which Susan came to her father's house on a cold, rainy afternoon in early February. After a couple of hours, the two began to relax and talk more easily, and during this phase of the interview the following (published) exchange took place.

Q: Did you ever fall in love with another man? I mean, because of the
homosexuality in Falconer, people are certainly going to ask you that.

A: The possibility of falling in love with a man seems to me to exist. Such a
thing could happen. That it has not happened is just chance. But I would think
twice about giving up the robustness and merriment I have known in the
heterosexual world.

Q: Well, have you ever had a homosexual experience?

A: My answer to that is, well, I have had had many, Susie, all tremendously
gratifying, and all between the ages of 9 and 11.

Thus Cheever seemed to brush the matter aside with an easy quip. In fact, as Susan recalled, the moment was quite a bit more fraught than the text suggests. “I have had many, Susie,” said Cheever—then, marking the startled look on her face, he added with the usual tremor of laughter, “all tremendously gratifying, and all between the ages of 9 and 11.”

The most important reviews appeared in advance of the Newsweek cover, and seemed to indicate that critics were either staunchly in favor or staunchly opposed. For the crucial daily Times review, Cheever had petitioned his old friend Christopher Lehmann-Haupt to ensure the services of John Leonard, who'd written a glowing and perceptive review of Bullet Park (while another Times reviewer, Anatole Broyard, had panned the novel in the New Republic). Unhappily for Cheever, Harper's had already commissioned a review from Leonard, and the review was bad: “Whatever happened to suburbia?” Leonard wrote, proceeding to take Cheever to task for deserting his proper subject in favor of distasteful, sensational material. “It's as if our Chekhov . . . had ducked into a telephone booth and reappeared wearing the cape and leotard of Dostoevsky's Underground Man.”

Since Leonard wasn't available for the Times review, and Broyard had been blacklisted, Lehmann-Haupt went ahead and reviewed Cheever's “extraordinary new novel” himself: “After a first reading . . . I could report that I had devoured it hungrily, marveled at the grace of its prose, been given nightmares by its early passages, and come away from it with a sense of a world set right.” That left Joan Didion's front-page critique in the Times Book Review of March 6, and while Didion had never been anything but lavish in her praise of Cheever, he worried all the same (“the rivalry between novelists is worse than the rivalry between sopranos”). But she, too, thought Falconer an “extraordinary new novel”—its author a consummate artist whatever the ethos of his fiction: “'Falconer' is a better book than the 'Wapshot' novels, a better book even than 'Bullet Park,' for in 'Falconer' those summer lawns are gone altogether and the main narrative line is only a memory.”

A few days later, Newsweek hit the stands (“A Great American Novel: John Cheever's 'Falconer'”) and demand for the book exploded. Falconer spent three weeks at the top of the Times bestseller list—ultimately selling almost eighty-seven thousand in hardback and over three-hundred thousand in its first paperback edition. While it was still number one, Cheever wrote his daughter a note: “The lesson let us help one another was not lost on you.”

The other shoe dropped a year later, when Dennis Coates completed his doctoral dissertation at Duke—the first book-length study focusing exclusively on Cheever's novels, and one of the few academic studies on Cheever, period. Coates had come to Cheever’s home in Ossining a few years before to interview his subject, and the two had become friends; then one day Cheever had tried to kiss the handsome young man in the woods, which had led to an epiphany of sorts on Coates's part: “I thought, 'Oh my God, I've got to go back and reread all the books and really get it this time' . . . and there it was! It was all there. So that really allowed me to put the thing in perspective for the dissertation.”

The “thing” was Cheever's bisexuality, which for Coates had become a sort of skeleton key unlocking the real meaning of Cheever's work. “My life has always been an open book,” the latter calmly replied, perhaps failing to consider the full implications when Coates mentioned his discovery. In any event, after receiving his Ph.D. that spring, Coates eagerly mailed his subject a copy of the dissertation—which began by boasting its author's “knowledge of John Cheever, the flesh and blood person,” followed by a long biographical profile that proved as much. “I read Denny's dissertation,” Cheever wanly noted in his journal, “in which he concludes that I was, as a child, a tubercular shut-in with a manly brother. In order to conceal my homosexuality I married, made my wife miserable and bitter and finally rose to greatness in my last novel by admitting my love for cock.”

The preçis is simplistic, but not inaccurate. Having made the point that the protagonist of each novel is “overtly modeled on the author,” Coates invites the reader to consider the “oddity” of the pervasive “homosexuality theme,” insofar as it “often surfaces without the benefit of a clear connection to what may otherwise be a fairly coherent creation. . . . Inevitably, explanations of these problems lead to revelations about the novelist himself.” So it goes for a couple hundred pages, more or less. Given what must have been his mounting, ineffable horror, Cheever's reply to Coates was impressively temperate: “My congratulations on having completed such a difficult task. I do find it particularly distressing when censure is involved in an assessment of my work and my life. You copiously quote from a man who obviously gets a stick prick at a blade of grass and you conclude that this has destroyed the women around him. I can't agree.” Coates was mystified by what appeared to be a somewhat hostile reaction (“an open book”?), and promptly gave his favorite writer and good friend a call—but Cheever was “cold,” and presently hung up.

Blake Bailey is the author of A Tragic Honesty: The Life and Work of Richard Yates. He is working on a biography of John Cheever.