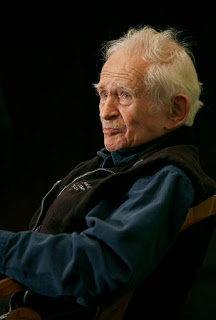 One form Mailer unequivocally mastered in his life time was the interview. Over the decades he gave hundreds of them, including right up until his death. The following dispatch comes from NBCC member Dylan Foley, who was finishing up with Mailer on that rainy morning in Provincetown when I met him last winter. Here is Dylan's account of that meeting with the writer.

Norman Mailer died in New York City on Saturday at the age of 84. Over the six decades of fame since “The Naked and the Dead” came out in 1948, Mailer had turned out masterpieces like the Pulitzer Prize-winning “The Executioner’s Song” and “The Armies of the Night” and critically skewered works like “The Gospel According to the Son.”

Mailer’s macho personal and public life often became larger than his novels and journalism. He had six marriages, one wife he stabbed at a party, various mistresses and nine kids, boxing matches and a satirical run for Mayor of New York City with Jimmy Breslin, using the motto “Vote the Rascals In.”

Last December, before the publication of his last novel, “The Castle in the Forest,” the story of Hitler’s family life as told by the devil supervising Adolf and his father, I flew and drove up to see Mailer at his large brick house in Provincetown, Massachusetts. It was an 18-hour roundtrip from New York for an 80-minute cup of coffee with a literary legend.

I waited for Mailer in a massive living room overlooking the Provincetown Harbor, where a solitary rowboat was anchored 30 feet out in the water. It was a rainy day and the room had a subdued, heavy air. Mailer’s ex-model wife Norris Church Mailer was rumored to be very ill with colon cancer and on a side table was typewritten inventory of the many books and paintings in the room.

Mailer came out, learning on two canes to compensate for his arthritic knees and was dressed in a black Goretex pullover. His famous halo of white hair with thinning but still wild, his blue eyes clear and intense. Mailer was cordial and alert, his wit, intelligence and monumental ego still intact. “I tried to stop being a novelist many times,” chuckled Mailer. “I tried to be a boxer, I tried to be a filmmaker, but I guess God just kept calling me back, telling me that writing was the only thing I was good at.”

Mailer spoke of his infatuation with Hitler: “I’ve been obsessed with Hitler since I was nine years old,” the time he came to power in Germany in 1933. “My mother, who was a Brooklyn housewife but very smart, said, ‘Mark my word, this man is going to kill half the European Jews.’”

We bantered on the novel and Hitler’s abusive father, with his passion for molesting teenage hotel maids. The novel hadn’t met my taste (too much Hitler sex), but it seemed impossible to offend Mailer in any way. He was fixated on the creation of evil.

When I asked him about certain writing techniques he used in the new novel, Mailer used a stock line: “I’m like a shoemaker. I’ve been writing novels for 60 years. Like a shoemaker, I’ve gotten better at my craft.”

I am working on a big project on bohemians and sex in 1950s New York. One particular scandal involved Norman Mailer forcing his second wife, Adele Mailer, to go up to a woman writer she was feuding with and smack her in the face. This happened at a party in Provincetown and a hair-pulling fight ensued on the beach outside. The horrifying thing was that the men in the house, including Mailer, came out and watched the fight, taking bets instead of breaking it up.

I asked Mailer about the fight and his face lit up. “Adele and I were having an affair with this woman playwright who was also involved with the woman writer,” he said. Adele was the wife he later stabbed. They had a tumultuous marriage, full of affairs and jealous rages.

Mailer played with semantics, saying that he didn’t necessarily cause the fight. “Adele was angry at this woman,” said Mailer with a conspiratorial glance, rubbing his hands together. “I said to Adele, ‘If you are so angry at her, why don’t you just go up and hit her?” Adele Mailer hit the writer and the fight started.

Mailer had another story for me before it was time for me to leave. His next door neighbor in the East Village had been the anthropologist Tobias Schneebaum, who lived with a cannibal tribe in Peru in the mid-1950s and ate human flesh. Schneebaum wrote a book about the experience called “Keep the River on Your Right.”

“Tobias was staying at the writer Vance Bourjaily’s house,” said Mailer. “He called me up in hysterics. There was a dead mouse. ‘I can’t deal with this,’ Tobias moaned. I had to go over there and get rid of the mouse.”

Dylan Foley is a book columnist for the Newark Star-Ledger.