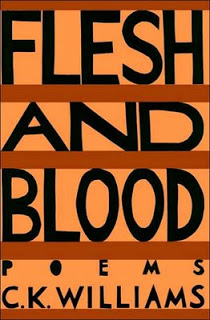 The following essay by Steve Almond kicks off the latest week of In Retrospect, which will revisit C.K. Williams' collection, “Flesh and Blood,” which won the NBCC's award for poetry in 1987. This piece is copublished today with the Hartford Courant.

At 30, I arrived in Boston, fresh from a disastrous overseas love affair, lonely, aggrieved and, worse yet, convinced I was a poet.

This made no sense. My formal training was in prose. I'd written several dozen short stories, all of them wretched. But I was all done with that racket now. My feelings – the humming fibers of my very humanity! – were too intense to be captured in stories.

And so I spent a year fuming away in my unfurnished apartment. I wrote a poem a day, grasping at all available clichés: the trees outside my window, the clouds, the women who wisely stifled my advances, all of whom were reborn as cruel Greek goddesses.

Eventually, I showed my work to an actual poet, a friend who gazed at my poems with heroic forbearance and sipped his wine and finally went to his bookshelf and withdrew “Flesh & Blood.”

I'd never read C.K. Williams before, and I didn't quite understand what he was up to at first. His lines looked like sentences. His style was colloquial, discursive, disconcertingly narrative.

But the more I read his poems the more I found I could not stop reading them. They contained such sudden, brutal revelations – of shame, doubt, selfishness, lust – all the secrets from which people spend their lives hiding.

It was a quality of attention I'd never encountered with such bruising consistency. In eight sinuous lines, he isolated the single moment of maximum emotion, burrowed inside that moment and made us feel the person burning at its center.

He wrote with such tenderness about the dispossessed: whores in Amsterdam, whispering subway lechers, a “pretty post-teen princess gone to the grim gutter.”

That was the other thing: his language. Somehow, in the midst of manifest suffering, he managed to capture the rescuing beauty of the world. The flashing yellow beak of a blackbird. A box of foil-wrapped chocolate eggs. The bulges and crevasses of his baby's naked body.

The deeper I read, the more it struck me as Biblical. Williams refused to prettify the species. He recognized the sins and failings of humankind yet, in so doing, forgave them.

I read particular poems over and over. “Fast Food,” for instance, about a girl struggling to fill out a job application. Unable to perform the math problems called for, she stares at the blank page:

“Never so white was white as that white,” Williams writes. “Oh white, angel of white, never were you so pure, never so seared by anyone's eyes …”

Another favorite was “On the Other Hand.” It was about an older woman who found Williams at a party and “put her hand on my hand on the landing, caught me there and held me for a moment, with her hand, just her gentle hand, and with her look … and pulled me to her, hard, and kissed me, hard, to let me taste what subtle lusts awaited me.”

Those subtle lusts! How I ached to taste them, and imagined I could!

Naturally, I spent the next several months emulating Williams. My poems were pale replicas. I couldn't quite see it then, but they lacked the formal rigor, the depth and urgency of the genuine article.

It would occur to me only years later why my friend had given me “Flesh & Blood.” He was gently suggesting that there was somebody already occupying the post to which I'd recklessly nominated myself, and that he was doing splendid work, and that I was, therefore, going to have to make my own way as a writer.

Williams would serve as my guide, though, if I let him. His advice was plain enough: It was OK to be desperate. It was essential.

“The only field still left to us to situate our anguish and uncertainty,” he counseled, “is in the single heart.”

I no longer write poems. I do try to honor those words.

—Steve Almond is the author of the story collections “My Life in Heavy Metal” and “The Evil B.B. Chow,” an epistolary novel, “Which Brings Me To You,” a memoir of sorts, “Candyfreak,” and, most recently, “(Not That You Asked): Rants, Exploits, and Obsessions.”