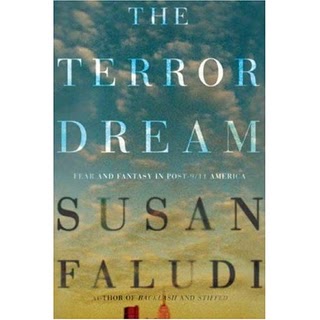 So many books, so little time! So many apples ripening unpicked! “Season of mists and mellow fruitfulness” etcetera: autumn is upon us, fall books as well, though I am still mulling over the many offerings of summer, not to mention long-dead writers whose works ever beckon. But given-or taking-time to think about what I've been reading and hoping to read this fall, I find myself looking forward especially to Susan Faludi's forthcoming “The Terror Dream: Fear and Fantasy in Post 9/11 America” (Holt/Metropolitan). Faludi is one the smartest and subtlest cultural-political analysts we have, and for all the yammering about terror, al-Qaeda, Iraq, Bush, oil, plutocracy, democracy, Islam, falling men etc., we still have a need for some actually trenchant analysis of the grim weirdness of our post-9/11 moment. Given her previous work (e.g. the NBCC winner “Backlash”), Faludi seems especially well-prepared to illuminate just how reactionary the gender-politics of these past years has been: the longing for hyper-masculine heroes (e.g. fireman), the production of outworn or fabricated narratives of various military exploits (saving Jessica Lynch, anyone?), the contempt for complexity. For a writer completely at home with a ludic complexity (apologies for the segue), one might turn to Wayne Koestenbaum, poet and essayist, whose new “Hotel Theory” (Soft Skull) looks to be a wittily mind-scrambling venture. One of the last remaining high priests of camp- though can camp ever die?- Koestenbaum has written a genre-bending hybrid, a “dime novel (called “Hotel Women”) featuring Lana Turner and Liberace” (as the back cover has it), alongside a “meditation on the meaning of hotels.” With recent books on airports and malls as the exemplary spaces of our lives, surely there is room for this adventure. I may not end up liking this, but it certainly looks interesting: the book is presented in twin columns.

On the interest front: well the buzz is officially sanctioned, what with Michiko Kakutani's givingJunot Diaz's “The Brief Wondrous Life of Oscar Wao” (Riverhead/Penguin) an uncharacteristicallyfulsome rave in The New York Times. Colleagues here at the NBCC are also enthusiastic-see for example Marcela Valdes's and Lev Grossman's previous remarks on Critical Mass. Given these recommendations I have to go back!-because I started the novel some weeks ago with highest hopes, having loved (and reviewed) his 1996 story-collection “Drown.” For some reason-mid-summer anomie? mind-fog? a concern that this was going to be another example of “hysterical realism”? (cf James Wood)-I couldn't get into the novel: but there's time to rethink, and I'm looking forward to a real immersion.

Already rewarding immersion: Julie Carr's delicate, open-air poems in “Equivocal”: the strangeness of experience, motherhood, anxiety caught in surprising loops of language-“Since the lip of the girl, our girl, does not yet contain dying”; “Sick child in his parents' bed making the plastic things talk.” Swift notational lines, economical swoops of thought, a thinking through poets' and philosophers' goads, odes to “the murmur in my wedding ring,” the daily round gone beautifully peculiar even as it stays ordinary, “Yellow kickball soars over ballwall.” The highpoint for me: a gorgeous prose poem, “Iliadic Familias (with insertions from Homer),” which weaves personal memory and images of mothers mourning in the Iliad with the politicized now:

My mother used to cry in the car while driving to stop the sorrowful fighting. This was terrifying to me in the back seat. We shall fight again afterward until the divinity chooses between us. Not only is she responsible for my safety, she gives victory to one or the other. And now I cry in the car while driving. By this time the terms of death hang over us. My children behind me fight.

Somehow Carr manages to evoke simultaneously a childhood suffused by Vietnam, her current life as another war seeps into us, and the perpetual strife and mourning Homer himself sang, human wars apparently unending.

Finally, on a different note: I've also recently read and enjoyed some books that have now been out for some months: Joan Acocella's “Twenty-Eight Artists and Two Saints”-terrific essays studded with brilliant apercus and doing some of the most important work any criticism should: returning us sharpened to artists' work. Also Ian McEwan's “Chesil Beach” with its disastrous collision of virgin newlyweds: riveting, mesmerizing, glossily perfected sentences-but did anyone else feel this was a minor study, the work of a master in his off hours?