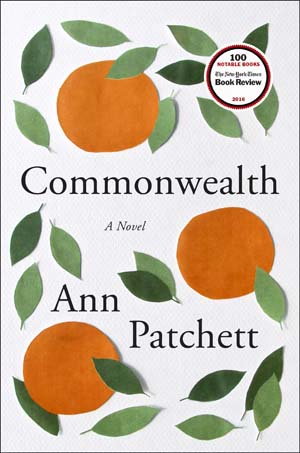 What I've been reading or looking forward to reading, with great interest for fall:

Ann Patchett's “Run” (HarperCollins)24 hours in the life of a Boston couple who have one son and two adopted sons (both African American). The father takes the adopted sons to a Jesse Jackson lecture at Harvard. I have lectured about and taught Patchett's work, including “Bel Canto,”and I am eager to read the new novel.

Andrea Barrett's “The Air We Breathe” (Norton) weaves in some of the same characters first met in Barrett's National Book Award winning novel “Ship Fever.” The setting is a TB sanatorium in the Adirondacks, late July 1916. . In the opening pages Barrett presents a Greek chorus of sorts: “Back then we lay on our porches in orderly rows…Fields surrounded us–they still do–and also a river, three ponds, and the road curving down toward the village. After the cities from which we'd come, this looked to us like wilderness. Rivers, mountains, wild geese honking. The air meant to cure us pouring antiseptically through the woods… We weren't a big group even then–sixty women and sixty men, if every spot was taken–and a single arrival shifted scores of relationships, as did a single discharge, or a death. On the porches we gossiped as eagerlyl as we drew breath. Twice each week, if the mist didn't block our view, the train pulled up to our unmarked siding and we inspected who might join us next.” I'll keep reading….

Also, Junot Diaz 's first novel, “The Brief Wondrous Life of Oscar Wao,” just published by Riverhead, a whirlwind of a novel about a family curse in a Dominican family (and in North America) played out, along with references to everything else under the sun in this electric century.

Richard Russo's “Bridge of Sighs,” (Knopf),about a happiily married couple from upstate Thomaston, New York preparing to visit a friend in Venice. As a fan of “Empire Falls,” I have it on my list.

And, for review, “Refresh Refresh” (Graywolf), a short story collection (his second) by a relative newcomer named Benjamin Percy. The title story is about high school guys whose fathers are in Iraq. It is set in Oregon, was first published in the Paris Review, and it has a fresh and powerful perspective on our times.