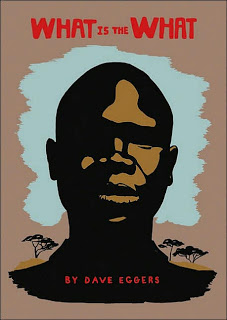 Today's posts will focus on Dave Eggers' novel, “What is the What,” a finalist for the 2006 National Book Critics Circle Award for fiction.

War, famine and ethnic hatreds have, in our time, driven untold masses across disparate parts of the globe like clouds across the sun. Where, it was asked just this week of the International Criminal Court in The Hague, do you draw the boundaries between genocides' guilty and innocent?

Among the most tragic of those involuntary waves was the flood of Sudanese men children — the so-called Lost Boys of Sudan — in the mid-1980s, when lethal raids by government-sponsored Arab militias from the north against non-Arab towns and villages in the south left many bereft of homes, families and roots. Some 17,000 were compelled to trek giant distances and many years to Ethiopia, only to be further displaced to Kenyan refugee camps.

That one of them — Valentino Achak Deng — came to the States and Dave Eggers’ attention resulted in this out-of-the-ordinary book, in which Deng’s memories and voice and Eggers’ unselfishly empathetic ear and ancillary reporting work together to become a novel. What Is the What is a strange hybrid: a fictionalized memoir of someone else's life, but the craft, care and considered flights of imagining that went into it earn it its place in the fiction genre.

Deng and Eggers spent years together — though just a fraction of the twenty Deng struggled through in the desert, on the road, in hiding, at the mercy of animal and human thugs, buried in the decade-long misery of a refugee camp — talking through Deng's experiences and later traveling to Sudan to see and talk to others. Voices come over you early in the book. Deng's apartment in Atlanta is burglarized and Deng taken hostage by a couple and their teenage son, and Deng speaks and speaks and speaks to the boy to try to win a measure of freedom.

His telling trails back and forth in time to put forth his story, and in his head his voice addresses rude strangers and friendly members of the health club where he works with “silent stories” as he fights to keep his dignity intact. Wrapped around his odyssey of expression is Eggers' ingenious narration, the written sound of crucially capturing another's voice because without it the book would be as good as silent. But Deng isn't left off the hook of what Eggers' does for a living, either. In his case he does it to survive — to win himself a spot among the Lost Boys finally offered a home in the U.S., he has to write an essay about why he deserves to be chosen, and fills an examination book.

Eggers makes it deeply overwhelming to think about the distances Deng covered, by far not all of them in the geographical sense, and how his ideas of distance changed. The world's new tribalisms, adding to the still-festering ancient ones, thrust him out into a confusing existence cut off from spatial relationships as he once knew them. His father, he remembers, “had no quarrel with the Islamists in Khartoum. They were not bothering him, he said, they were half a world away.” Khartoum? Try Miami or Seattle, or his camp mentor Noriyaki’s native Japan.

Deng is kept going by faith, something not exactly in evidence in Eggers before. It draws on a panoply of religions both inherited and encountered, but, except for one suicidal episode, maintains an indestructible faith in a God. Which is to say, in the varying degrees of goodness in others. So maybe Eggers, once a lost, orphaned boy and brother himself, actually comes less strangely than expected to the subject. Deng's beliefs kept Deng honorable, and helped him find one of our more honorable writers for his story. There is even a happy ending beyond the book's (the proceeds of which go to the Valentino Achak Deng Foundation). After years of rejection, red tape and set-backs, he's now in his second year at Allegheny College in Meadville, Pennsylvania..

The foundation supports organizations and people trying to improve life for the Sudanese in the United States and in Sudan. To donate, tax-deductible checks can be sent to: