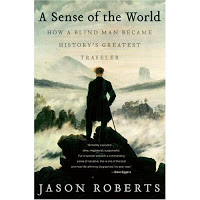 “A Sense of the World: How a Blind Man Became History’s Greatest Traveler” by Jason Roberts (HarperCollins) is a finalist for the National Book Critics Circle Award in Biography.

Born during 1786 in England, James Holman seemed intelligent but not particularly remarkable as a young man. He liked to dream of travel, and fulfilled some of those dreams by joining the Royal Navy and heading out to sea as a teenager. But it was not until age 25, when an undiagnosed illness took away his sight, that Holman started living a life worth chronicling for an audience nearly 200 years later.

Until Holman’s death in 1857, he accumulated accolades due to his daring adventures to remote locations, from Siberia to the African island of Fernando Po. Holman’s travels would probably have become the stuff of legends even if he has been sighted. But because he accomplished his journeys while unsighted, he achieved fame in his time as “The Blind Traveler.”

Holman’s fame faded quickly after his death. Author Jason Roberts learned about Holman four years ago while browsing books on a library shelf because he was procrastinating from his immediate writing assignment. A magazine freelancer living in Northern California, Roberts could not help himself. For reasons even he could not explain, he felt compelled to learn more about Holman. That meant finding obscure, out-of-print books and articles from the nineteenth century, as well as following in the Blind Traveler’s footsteps.

The biography of Holman succeeds because of Roberts’ tenacity, his skill at explaining blindness to the sighted, and his marvelous way of stringing words together. Roberts explains Holman’s skill at “touch-based understanding,” also known as “haptic perception.”As Roberts notes, “Where vision gulps, tactility sips. In the haptic world, an object yields up its qualities not all at once, at the speed of light, but successively over time, and in sequence of necessity. It is not a flash but a process, like the procession from rough sketch to finished portrait.”

Given Roberts’ insights into Holman and the lyrical prose he employs to share those insights, I’m going to end with the biographer’s words:

“There will never be another James Holman. But there will always be people who must summon the courage to plunge, wholeheartedly, into a world complex beyond our illusions of comprehension. It was to them that Holman addressed his most unguarded words.Contemplating his circuit of the world, he confessed that the most profound moments left him feeling not blind, but mute.”

An interview with Jason Roberts from the San Francisco Chronicle.