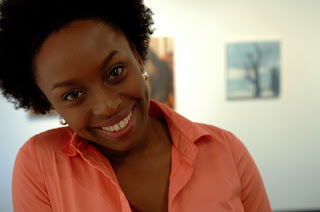 Chimamanda Ngozi Adichie returned to the US from Nigeria, where she was launching Half of a Yellow Sun in December, to learn the “lovely lovely news” that her novel was a finalist for the NBCC award in fiction. She is now in New Haven, where she is a graduate student at Yale. She answered some questions about the novel in a Critical Mass interview in September. Here is an excerpt:

Q. Tell me what it was like to work on a novel about the Nigerian civil war in the 1960s, when Biafra wanted to secede.

A. The Biafran was a very painful war, and writing this book has been painful. I don't think I ever will do anything like this again. It's as though I am picking through shreds of pain. I would often start to cry. What Biafra is, for the Igbo, it's people who are wounded, and somebody poured salt in the wound. On the other hand, I'm pleased about the prospect that this novel might get Nigerians talking about Biafra. A lot of the issues are not resolved. And I'm prepared to have people say that this young writer has no business writing about Biafra.

Q. You were born after the war. What sort of research did you do to capture the feeling of the buildup of tension, the massacres of Igbo, the arming of an independent Biafran army, the war scenes, the refugee camps, the starvation?

A. Working on the book, I surrounded myself with more research than I could use, including photos of children. It's unbelievable what starvation can do. I would think, they could be my cousins. My father has helped with research, answering questions I had. I'm using my father's memories.

Q. How was your father affected by the war?

A.&nbnbspMy grandfather died in a refugee camp, during the war. But my father couldn't really say good-bye. The roads were too dangerous. My father is a very reserved man. He told me how finally he was able to get there, and somebody pointed at where his father had been buried. It was unmarked. He took a handful of dust, and brought it home. It broke my heart. He admired his father.

Q. How did you decide upon the narrative points of view for this book?

A. I have three major characters, two are men (one an English man) and the third is a woman. Biafra can't be told without the men. The men were in control. I have a rape scene that is very powerful, and very detailed. This is what happened to many women. It's a story I have heard over and over. It's a means of control to gang rape this girl in the midst of war. I think it's important to tell the stories of what women went through. I also like writing from the point of view of a white man. I am exercising my imagination, with a 75-year-old Englishman as my model.

Q. It seems you and your father are close.

A. When I was much younger I thought my father never slept. I thought he was invincible. Now he is older, he's diabetic and 74, and the average age for men in my country is 56. Every time the phone rings I'm afraid it's something. I'm fascinated by death and constantly thinking about death. For me, love and death come together.

Q. Do you think this connection of love with death has anything to do with the war?

A. What I know about the war was from listening to my father. I know the pain he went through. He would never say, “I was in deep pain.” He will say he took a handful of dust from his father's grave. In the end, Half of a Yellow Sun is a novel about love.