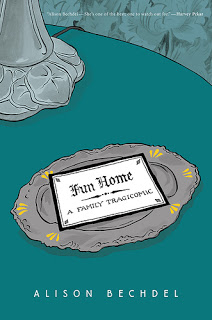 Today's posts will focus on Alison Bechdel's FUN HOME, a finalist for the 2006 NBCC award in autobiography.

ARE MEMORIES predominantly visual or verbal? Alison Bechdel draws on all sides of her brain — and ours — in FUN HOME, a genre-extending, mind-expanding graphic memoir about growing up lesbian with an exacting, closeted gay father who's a funeral director, high school English teacher, and obsessive restorer of the family's Gothic Revival home in tiny Beech Creek, Pennsylvania.

Bechdel examines fraught family dynamics in expressive blue-washed ink drawings and percipient narrative, which work together to add up to more than the sum of their parts. It would take paragraphs to capture the details and nuances that she distills in each of the nearly 1,000 frames that make up FUN HOME. For example, a frame headed, “Dad didn't have much use for small children, but as I got older, he began to sense my potential as an intellectual companion,” pictures her ever-industrious and censorious cutoff-clad father looking askance at short-cropped, adolescent Alison reading “The Fellowship of the Ring” while he waters houseplants. “When are you going to read 'Catcher in the Rye’?” he asks. In the next frame, the narrator comments, “Years of neglect had left me wary.” Without even looking up from her book, young Alison retorts, “After I put you in the nursing home.”

Bechdel is convinced that her father's death when she was 20, two weeks after her mother asked for a divorce and just a few months after Alison came out, was suicide made to look like an accident–“quite possibly his consummate artifice, his masterstroke.”

Drawing on her childhood diaries, family letters, and the writers she and her father read searchingly — Proust, Fitzgerald, Joyce — Bechdel probes her past with the help of literary exegesis. But unlike her father, who used literature as a scrim with which to distance himself from his feelings, she uses it as a tool to help pinpoint hers.

She eschews linear chronology to return repeatedly to troubled sticking points she's still trying to digest — learning her father had sex with their male babysitter, or that he'd backed off a bank into an oncoming truck while gardening. The result is a richly layered, multi-faceted portrait of a complex relationship.

Ordinarily, I'm so predominantly verbal, I have to remind myself to look at the picture side of postcards. Reading FUN HOME, I inhaled the text but, with equal fervor, also pored over the finicky period decor, Bechdel's father’s clench-jawed expressions, and the stoic forebearance evident in her mother's stance. Months after reading this, both the visual and verbal images have stayed with me.