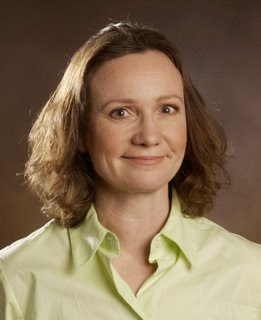 OVER THE NEXT YEAR, the NBCC will be talking to book editors and critics around the country. We recently tracked down Karen Long of the Cleveland Plain Dealer, who took a break from her weekly email barrage to answer six questions about being book editor there.

Q: You have worked on the religion page, the science beat, before winding up
at the book beat. Which has proven most polarized?

A: Each has its La Brea tar pit, but I'd have to pick religion as the most contentious — perhaps it's the nature of the beast. While I loved covering science for the challenge of translating physics and biology into journalism, I learned how to listen by covering religion, trying to accurately capture ways of looking at the world that were frequently alien, and sometimes anathema, to mine.

Q: How would you characterize the Plain Dealer's book pages? What do you want them to provide? Where are they going? What do readers give you the most feedback about?

A: The Plain Dealer's book pages offer readers about 10-12 books to consider each Sunday, ranging across genres and tastes. As one of the dinosaurs of mainstream media, we try to appeal broadly, being sure to include a children's review and a balance of fiction and nonfiction in every issue. I try to keep in mind our local make-up, plenty of hospital workers, university and blue collar people, sports enthusiasts and reading groups, plus a local heritage that draws from African-American, Irish-American and Eastern European stock. And of course I try to pay attention to good regional writers.

While we aspire to review “important” books, our size prevents us from addressing the vast majority of strong titles. This, in an interesting way, is liberating, because it frees me to select many books that are personally intriguing, and to try to combine them in interesting ways. For example, Sunday, Aug. 20, we paired a lead review of “The Wonga Coup” with the beautiful, J.M. Ledgard novel, “Giraffe” and pulled in a short story collection called “Brief Encounters with Che Guevera,” which has some thematic overlap. That was fun.

As for feedback, our children's reviewers receive a lot of e-mail, often seeking book selection advice. The nonfiction provokes more response than fiction and books with a strong political angle will fire-up e-mailers.My review of “Fear,” the Jan T. Gross exploration of post-war anti-Semitism in Poland, drew a lot of response, most of it angry, some from as far away as Warsaw.

Lastly, it's hard to gauge our direction while the economic outlook for newspapers is harsh. I try to stay optimistic. The overlap between book lovers and newspaper readers seems obvious to me.

Q: Who was on your bookshelf at home before you started this job, and who has been added to it since?

Before, some books in my living room, in a place of honor:

“A Bend in the River” by V.S. Naipaul
“Death Comes for the Archbishop,” by Willa Cather
“The House of Mirth” by Edith Wharton
“Female Eunuch” by Germaine Greer
“Foe” and “Disgrace” by J.M. Coetzee
“A River Runs through It” by Norman Maclean
“Grey is the Color of Hope” by Irina Ratushinskaia (out of print now, but
beloved by me)
“The Leopard” by Giuseppe di Lampedusa
“A Civil Action” by Jonathan Harr
“Regeneration” by Pat Barker
“One Hundred Years of Solitude,” by Gabriel Garcia Marquez
“The Spirit Catches You and You Fall Down” by Ann Fadiman
“Interpreter of Maladies” by Jhumpa Lahiri
“Pontus Pilate” by Ann Wroe
“A Primate's Memoir” by Robert Sapolsky
“A Woman's Story” by Annie Ernaux
“Genome” by Matt Ridley
“The Snow Leopard” by Peter Matthiessen.

After, starting from February, 2005, the additions are:

“Kafka on the Shore” and “”The Wind-Up Bird Chronicle” by Haruki Murakami
“Last Night” by James Salter
“Rules for Old Men Waiting” by Peter Pouncey
“A Year in the Life of William Shakespeare: 1599” by James Shapiro
“A Woman in Berlin” by Anonymous
“1491” by Charles C. Mann
“Everyman's Rules for Scientific Living” by Carrie Tiffany
“The Accidental” by Ali Smith
“Divine Wind” by Kerry Emanuel
“On Beauty” by Zadie Smith
“A Sudden Country” by Karen Fisher
“Strange Piece of Paradise” by Terri Jentz
“Arc of Justice” by Kevin Boyle
“De Kooning: An American Master” by Mark Stevens and Annalyn Swan
“Them” by Francine du Plessix Gray

Q: In a recent column, you said we ought to lighten up about watching TV.Do you have any guilty TV habits, or is the Long household TV directed squarely at enlightenment?

A: Oh yes, TV and guilt are a rich vein in my household. One of my guilty pleasures is hockey — long story — and I will actually climb to our third floor, where our single television is placed, and watch hockey in the winter, especially college games. That single TV got a scandalous workout last year when my middle child -always the peacemaker – gave me at Christmas the entire first season of “Lost,” a silly soap opera among preposterously good-looking castaways who spend a strange amount of time partially dressed and wet. Of course, my 16-year-old son wanted these for himself, but he hooked all five family members to such a degree that, after church Easter Sunday, we gorged ourselves on 3 episodes in a row. One of my better-disciplined book reviewers has looked down on me since.

Q: Do your kids ever read your section? How do they regard your work?

A: My three kids read the section only sparingly, although their criticism is useful. My 13-year-old daughter told me that in a recent column “you sound like you are trying too hard.” She had a point. My oldest child, who is 19 and tired of me, shook his head and warned me not to be a killjoywhen I disliked “Water for Elephants.” And he thought I was poaching, generationally, when I referenced Radiohead in a different review. My middle child, who has an enviable interior life, listens to books-on-tape, so we discuss those rather than the Plain Dealer book pages. He was quite helpful last year when I wrote my first Harry Potter review, because he has read all the books and I have not. He read an early version of my criticism and caught my faux pas.

But generally Mom's job induces eye-rolling from all three of them. Some
things are eternal.

Q: You should tell them the karma police don't just exist in Radiohead songs. Speaking of which — Cleveland is home of the Rock and Roll Hall of Fame. Does the book page do much music reviewing?

A: I try to be alert when the hall of fame brings a good author into town, such as last year's visit from Peter Guralnick who did the strong Sam Cooke biography. And we recently reviewed “Song for My Fathers,” a bittersweet little book about New Orleans music a half century ago. But thanks to the first-rate staff reporters who cover music, everything from rock to the Cleveland Orchestra garners a lot of attention in the newspaper as a whole. I am also a little phobic about boomer nostalgia. I couldn't get behind the fuss over the new Timothy Leary bio.