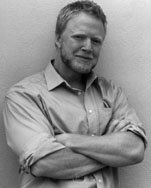 Today we're kicking off a series about New Orleans writers. It's hard to judge how many writers have been displaced, dislocated and disoriented by Katrina and aftermath. There are many who already have written about the tragedy (Tom Piazza and Andrei Codrescu among them) and still more who continue to illuminate our sense of this flawed and beautiful city some have called the soul of America. I tracked down Joshua Clark, author and publisher of the small press, Light of New Orleans Publishing, to kick off the series. He was just back from a trip to Central America, his first break since a weekend in November when he left New Orleans for the first time to take part in a benefit for New Orleans writers I organized at Canio's Books in Sag Harbor. A dozen East End writers and artists, including Harvey Shapiro, Star Black, Fran Castan, Siv Cedering, Sheridan Sansegundo, JoAnne Carter, my husband Mark and I, all read excerpts from French Quarter Fiction. That's the anthology Clark edited and published in 2003, then reissued after Katrina with a portion of each sale going to a special fund set up by the New Orleans Literary Institute to give grants to and support readings by New Orleans writers. Clark stayed in the French Quarter throughout the days of the storm, celebrated his thirtieth birthday there, wrote about his experiences for Salon and now is completing a memoir for Simon&Schuster. Here is how he is doing now:

I'm busier than ever here. I'm trying to finish my Katrina memoir and a hundred other things. For awhile we kept track of all the New Orleans writers on the K.A.R.E.S. website. We're still giving out grants and books and things, does the website does not still have up to date info on our writers because for the most part they've all settled now. Meanwhile, I'm reading The Great Deluge (Brinkley) and Breach of Faith (Jed Horne) in order not to repeat everything they say in my own book, which is really a much more personal, intimate, all first hand account anyway. Also re-reading Hemingway's Islands in the Stream for no apparent reason other than I love it. Life here is slow, over a hundred with the heat index, hard to move. As always, tourists leave us be these months. The empty streets of the Quarter beat with hammers on roofs, frantically trying to beat the next one. Life in most areas is getting back to normal, although a bit pruned, just like the few trees that still stand. But we love it, and we'll never ever stop loving it.