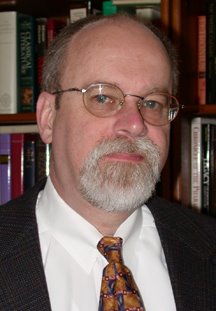 AS PART of an ongoing series, the NBCC will be talking to book editors and critics around the country. We recently caught up with member Fritz Lanham, book editor of the Houston Chronicle.

Q: How did you become book editor in Houston, and does the heat there ever affect your judgement?

A: I became book editor by being in the right place at the right time with the right credentials. In 1993 I was chief of the features copy desk here at the Chronicle. I had done book reviews on a freelance basis for the Chronicle and had previous experience on another paper as a reporter and a section editor. So I had the range of relevant experience. When the then-book editor retired suddenly for health reasons, I slid right into his slot, slick as that. I'm not sure they even advertised the position except in-house.

Having grown up in Houston and lived in Texas most of my life, I'm sure the heat has warped my judgment in ways I don't even want to imagine.

Q: I don't think most people think Houston when they think literary life, but I get the impression there's a lot going on there. What makes it a lively book town?

A: The University of Houston's Creative Writing Program, one of the largest and best in the country, brings literary figures to town in numbers we wouldn't otherwise get. For example, Inprint Inc., a nonprofit that raises money for the program, sponsors a reading series every year — Zadie Smith, Richard Ford and Mary Oliver will be among those reading in coming months. More than a few of the UH Creative Writing students stick around the city after graduation, energizing the literary scene. And then there's the faculty — people like the poets Adam Zagajewski andTony Hoagland. So that's part of it.

We also have two first-rate independent bookstores — Brazos Bookstore, which brings literary writers to town, and Murder by the Book, one of the best mystery bookstores in the country (EVERY major crime novelist comes through here on a regular basis).

Without these two bookstores and the UH program, the books scene in Houston would be pretty grim.

Q: How did you find most of your reviewers, or did they find you? And how many are based in Houston?

A: I inherited reviewers — I actually have three who have been reviewing for the Chron since at least the early '90s. I have lots of people, locally and not, approach me. I generally ask to see samples and a brief statement of the kinds of books they feel competent to review.

My problem is finding good local reviewers. I could fill the section with reviews written by non-Houstonians, and I do regularly use out-of-towners. But I feel an obligation to have local bylines in the paper. This, I am well aware, may be entirely misguided in that it assumes newspaper readers look at bylines and taglines. A good argument can be made that they don't. But I'm still always on the lookout for local people to contribute. Ironically, a half dozen of my regular reviewers are people who used to live here but moved away.

Q: How does the paper see the role of the books pages? As a consumer guide? As arts & enterainment? Are they willing to run off-the-book-page coverage about books?

A: I've always argued book reviews do two things: They inform readers about new books readers might want to pick up — a consumer-guide function. And they tell readers interesting things they didn't know — they enlighten, teach, unnerve. I've had this conversation with every new boss who's come along, and none, so far, has taken issue with it. So I guess that's as close to a formal statement as we have about the books pages' role.

In recent years there has been a real interest in making the features pages more newsy. We do a lot of features that play off events of the day. So there's certainly interest in running off-the-book-page coverage of things like the James Frey brouhaha, for example. When the Johnny Depp pirate movie opened earlier this summer I did a roundup of pirate books.

I can honestly say that Chron management over the years has been very supportive of books coverage. I've lost a little space since 1993 but not much.

Q: Do the local bookstores follow your coverage — and do you know whether a good review in your section will move copies there?

A: Local bookstores are aware of our coverage, but as a rule I don't hear that our reviews move a bunch of copies. But come to think of it I don't think I've put the question directly to them. I will.

Q: After editing the section for this long, when you turn back to writing yourself, do you find it comes more easily or do you still run into the same snags you had when you freelanced from the copy desk?

A: Being an editor — and a copy editor — has made me a better writer, no question about it. I like to think I writer tighter, with more energy, than I did before my editing experience. I have a better sense of what makes for a mediocre review — too much summary, tepid opinion. I wouldn't say writing always comes more easily. If I'm writing about something I'm not especially interested in — and that happens occasionally to everyone who writes for a living — it can still be like pulling teeth.