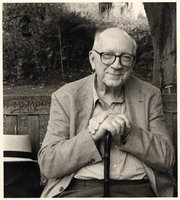 From “Updike: America's Man of Letters.”

“Can one imagine a lively argument among three readers about artisitc superiority when the first's notion of a great work is Toni Morrison's Beloved, while for the second it is Pynchon's Mason & Dixon, and for the third Updike's Rabbit at Rest? Most likely these readers would politely or rudely go their ways rather than attempt to persuade each other of their favorite's preeminence.”