This week we announced the finalists for the John Leonard Prize, our annual award for the best first book in any genre based on member nominations and chosen by a panel of member volunteers. As part of that process we invited members to contribute appreciations of their favorite titles. Below, member Letitia Montgomery-Rodgers writes on NoNieqa Ramos's novel “The Disturbed Girl's Dictionary” (Carolrhoda Lab). This review was first published in Foreword Reviews. 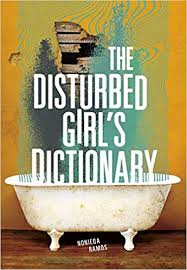 NoNieqa Ramos’s The Disturbed Girl’s Dictionary turns the spotlight on Macy Cashmere, a high school girl who lives in the margins of society. Noncompliant and proudly emotionally disturbed, she’s a problem that refuses to be solved, whether at home or at school.

Poverty’s where Macy is from, and she’s acutely aware of how it shapes and labels her, but she’s determined to reconfigure who’s defined by such labels and who’s doing the defining. You see, Macy’s writing her own book—a secret dictionary that lays out the terms of the world as she understands them.

Macy’s childhood is long past. Her father is in prison. Home is chaotic, and basic necessities—from food to heat to a place to sleep—are never assured. Child Protective Services removed her younger brother and would like to take Macy too, but Macy stubbornly insists on remaining, stuck between her yearning to salvage some sense of home and her desire to burn it all down.

Her life swings between this tension and her school routine. A problem student, Macy is nonetheless deeply engaged—in the well-being of her best friends, Alma and George; in the comforting control of breaking school rules and fulfilling her “bad kid” role; and in all that she ponders deeply.

Macy’s charisma is riveting. A keen observer, she’s unsparing in her assessment of herself and the world around her. Her blunt, no-nonsense voice lays out her most gruesome circumstances alongside bald yearning and makes her world of pain compellingly irresistible. More than anything, she's an unexpected narrator. Again and again, she directly addresses readers and slaps down assumptions. A study in contradictions, she insists on her world’s complexity, and she’s right. The story jukes and jinks and demands you follow.

As in Macy’s world, nothing in this dictionary is blunted or made safe for children; the circumstances of her life are laid bare. The result is a harrowing, heartbreaking tour de force, a story of will and determination against all odds.