The John Leonard Prize, our annual award based on member nominations and chosen by a panel of member volunteers, is awarded for the best first book in any genre. In advance of the announcement, we're inviting members to contribute appreciations of titles under consideration. (If you're interested in doing so, please email nbcccritics@gmail.com with the subject line Leonard.) Below, member Jennie Hann writes on Karen Hildebrand's poetry collection “Crossing Pleasure Avenue” (Indolent Books). 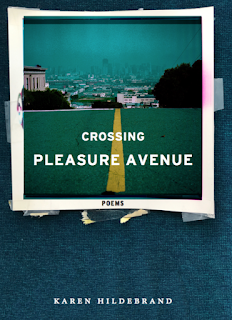 Indolent Books, the Brooklyn-based nonprofit responsible for publishing Karen Hildebrand’s exquisite debut collection, Crossing Pleasure Avenue, earlier this year, bills itself as specializing in “underrepresented voices whose work is innovative, provocative, and risky, and that uses all the resources of poetry to address urgent racial, social, and economic justice issues.”

Hildebrand’s remarkable lyrics embody this ethos and its implicit stance against indolence. Indeed, her poems command the reader’s attention; they demand that we be alert, vigilant, ready to meet with disaster at the end of even the most innocuous-seeming line, as, for example, when the speaker offhandedly reports, “Today my skin is blooming / like a shattered windshield.” In these poems about navigating life’s all-too-treacherous terrain, the possibility for a fatal accident lurks on every page. As we read, the painful indignities of youth (a skinned knee, a fender-bender, a bruised ego) are transmuted into the irrecoverable losses that come with age and maturity (“the cat, the ovaries, the him”). In the process, Hildebrand examines the paradoxical way in which our very existence is structured by the presence of absence; by vacancies, gaps, tears in the firmament; by the uncanny sense, intuited almost from the moment of birth, that something vital is missing.

Among the greatest pleasures afforded by Crossing Pleasure Avenue is the chance to fill in such gaps, to read between the lines and piece together these poetic fragments to reconstruct the biography of the exceptional everywoman the speaker represents. There is a powerful story embedded here, one with its origins in the era before abortion was legal in the United States. This history hovers, ghostlike, at the margins of the collection. In the haunting opening poem, for instance, the speaker recalls how, as a child, she would trace the branches of the family tree in her grandmother’s bible, adding, “Back then I had no reason / to doubt the space beneath my name would one day be filled with anything / less than desire.” Later, in the book’s title poem, the speaker, now an adult on a day-trip to the seashore, describes watching a mother turtle lead its newborn young to the water’s edge, then returning indoors to join friends “jostling for a place at the end of the bar, / to sit with our handbags swaddled / to our chests like the babies / we never had.” Finally, in a poignant Emersonian homage entitled “On Leaving” (which, fittingly, ends the volume), she relates how a “Mama Osprey” swoops down, “so close I can see her underbelly,” hanging suspended over her head for an instant as though in judgment. “How could she know that I was a mother too? / That unlike her, I had a choice.”

Crossing Pleasure Avenue is obsessively interested in genealogy, especially maternal lineage, and with good reason. This astonishing debut establishes author Karen Hildebrand as the inheritor of a robust, august tradition of female poets—from Anne Bradstreet in the seventeenth century to Amy Clampitt in the twentieth—who came into their poetic powers later in life. It is a major achievement.