The John Leonard Prize, our annual award based on member nominations and chosen by a panel of member volunteers, is awarded for the best first book in any genre. In advance of the announcement, we're inviting members to contribute appreciations of titles under consideration. (If you're interested in doing so, please email nbcccritics@gmail.com with the subject line Leonard.) Below, NBCC board member Marion Winik writes on Katya Apekina's novel “The Deeper the Water the Uglier the Fish” (Two Dollar Radio). This piece originally appeared on the website of Baltimore NPR station, wypr.org, where she recommends two books a week. 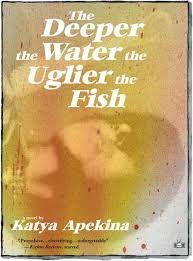 “The Deeper the Water, The Uglier the Fish” by Katya Apekina is a fractured Southern Gothic about growing up in a family full of mental illness and self-absorbed artists. Edith and Mae are in their mid-teens and living in New Orleans when their mother, Marianne, attempts suicide — poor Edith is the one who interrupts her partway through the process. Marianne is hospitalized and the girls are sent to New York City to live with their father, a famous novelist named Dennis Lomack whose entire oeuvre is based on his obsessive love of their mother. Marianne was his mentor's daughter and decades younger than he: he met her when she was a little girl and barely waited until she was legal before marrying her. His daughters arrive in Manhattan to find Dennis completely unqualified for parenting, but intrigued by his daughters' potential to unblock his writing. “We are such exciting material!” says Edith sarcastically. “Little mirrors in which he can stare at himself even more.” While Edith is desperate to get back to New Orleans and take care of her mother, fourteen-year-old Mae develops her own obsession with her father. When Edith finds a ride out of town, the unhealthy relationship between Mae and Dennis blossoms, and the seeds of another generation of artistic insanity are planted. The book has a complex and ambitious structure, a whirl of first-person accounts by the two sisters and many minor characters, along with letters, journals, and notes from the psychiatric hospital. “The Deeper the Water, The Uglier the Fish” is a debut novel, and does have some rough edges. But if the author keeps moving the direction she's going, we could be looking at another Lauren Groff or Donna Tartt.