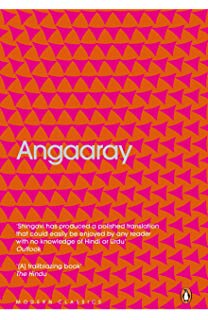 What are your favorite works in translation? That's the question that launched this summer's NBCC Reads series, which draws upon the bookish passions of NBCC members and honorees. We're posting the last batch through Nov. 7. (Previous NBCC Reads series dating back to 2007 here.)

In 1932 India, four Muslim Indian authors—Sajjad Zaheer, Ahmed Ali, Rashid Jehan and Mahmud-uz-Zafar—complied a collection of their short stories, Angaaray. Angaaray literally means flames as well as the verb to inflame. Inflame their stories did for Angaaray was banned and the authors feared legal action. Never-the-less, Angaaray was to be a crucial game changer for Urdu Muslim literature as well as the impetus for The Progressive Writers Association. However, it wasn’t until 2014 that an English translation of Angaaray appeared and I was finally able to read it.

Translated by Professor Snehal Shingavi in simple, direct language, the ten stories in this collection are exciting. What had these four writers exposed to cause scandal? The oppression of women, class conflict and, crucially, religious hypocrisy in Muslim culture. The Muslim world I know practices prudery in matters gynecological and sexual and yet here was Rashid Jahan’s play ‘In the Women’s Quarters’ about a wife whose annual childbirth has caused her uterus to lapse, a problem she gets fixed for her husband’s gratification, who yet demands she find him a second wife. Mahmud-uz-Zafar, in his lone contribution, 'Virility,' depicts a well educated man whose need to prove his manliness leads to devastating consequences for his already ill wife.

I was enthralled by the stories which address religion for, in contemporary Pakistan, where the blasphemy law is alive and kicking, no one dares critique faith let alone satirize it. In his story, 'A Night of Winter Rains,' Ahmed Ali’s protagonist, a mother whose children are starving, offers the following judgment on God:

Does God even exist or not?… He is very cruel and extremely unjust…. God? He is just an excuse, just a con. The patronizing consolation of remaining in poverty, a futile hope in desperate times, the means of remaining content in times of trouble. God? Just a smokescreen.

The diamond in this collection, and one that most emboldens my own work, is Sajjad Zaheer’s 'A Vision of Heaven.' In this story, a cleric declines sex with his willing wife in lieu of hugging to sleep his Quran and, consequently, he has a wet dream about angels and the Good Book. The Quran and wet dream conjoined and Zaheer’s story is emblematic of the buttons Angaaray pushes in polite society.

Also in Professor Shingavi’s translation are contributor biographies and photos, notes on the scandal as well as his translation choices. The appendices include a police document booking the collection and Mahmud-uz-Zafar’s letter aptly named ‘Shall We Submit to Gagging?’ What the magazine ‘Fire: Devoted to Young Negro Artists’ (1926), with works by Zora Neale Hurston, Langston Hughes, and Wallace Thurman was to the Harlem Renaissance, so is Angaarey to Urdu Literature.  Far from a relic of a time past, I believe Angaarey remains an essential read, one ground breaking in 1932 and, unfortunately, its concerns are just as relevant today.