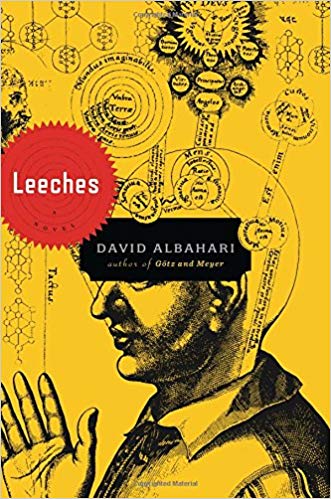 What are your favorite works in translation? That's the question that launched this summer's NBCC Reads series, which draws upon the bookish passions of NBCC members and honorees. (Previous NBCC Reads series dating back to 2007 here.) Tell us why you love the book (in 500 words or less) be it a new one, like Sayaka Murata’s quirky little novel, 'Convenience Store Woman,' or something a bit older, such as Stefan Zweig’s evocative memoir, 'The World of Yesterday.'  Please email your submission to NBCC Board member Lori Feathers: lori@interabangbooks.com

By 1998, Yugoslavia had splintered. Bosnia and Croatia had both made violent declarations of independence, and Kosovo was about as sound and stable as a one-legged dog. David Albahari’s Leeches begins on March 8, 1998, when the unnamed narrator, seated by the shore of the Danube, sees a woman get slapped. When she flees, he follows her, and he spends the rest of the 300-something-page novel—a single, uninterrupted paragraph—connecting clues that may or may not need connecting in order to understand a conspiracy that may or may not, in fact, exist.

To begin with, he starts to find triangles all over Belgrade—actually, a triangle in a circle with another triangle inside it, pointed the other way. “My grasp of mathematics had always been weak,” he confesses, “but perhaps these combinations of geometric shapes, their surfaces or the proportional ratios had some hidden meaning?” Perhaps; perhaps not.

In the meantime, our narrator roams the city in search of more signs. He sips coffee, walks, pauses for a roll with jam, walks, sleeps, smokes a joint with his friend, Marko, walks, falls in with a group of Kabbalists, and cleans up his front-door mat. He periodically finds excrement there—part of a series of anti-Semitic incidents recurring throughout Belgrade and Zemun, a historically Jewish municipality.

Albahari himself is a Serbian Jew of Sephardic extraction. He was born in Peć, a district of Kosovo, and studied at the University of Belgrade. In 1994, he and his family left for Canada; unlike other ex-Yugos, he has continued to write in his original language. His work is reminiscent of Borges, Joyce, Kafka, and Beckett, but he is utterly original: he sounds only like himself. We’re lucky to have him; we’re lucky to have Ellen Elias-Bursać’s gorgeous translations of his fiction.

In Leeches, Albahari confronts violence, nationalism, corruption, and prejudice—in short, the Yugoslav wars of the 1990s—obliquely. Marko wants to discuss the “situation” in Kosovo, but this narrator is consumed by his own conspiracy. Like Leopold Bloom, he traverses his city, and his city comes alive: “People were going from kiosk to kiosk, buying newspapers, carrying bread from the bakery, somebody whistled, the buses rumbled, a boy and a girl were kissing, sparrows landed on crumbs, and then,” says our narrator, “I thought that nothing could replace the fine warp and weft of life, that no government or system could completely unravel this fabric”.

Leeches is a strange beast: obsessive, paranoid, bleakly funny, absurd. There is no place to rest; the whole thing unfurls like an endless scroll, or like Borges’ book of sand, which, at one point, our narrator mentions by name. And yet there are clues scattered every so often—remember those triangles?—that indicate how this story might be read, what it might mean. “The times we were living in required a haven from reality,” we are told, “which could be found only by living everyday life in a fantasy or by reading meanings into reality.”

We here in 2018 might read some of that same meaning into our own reality.

Natalia Holtzman's work has appeared in Electric Literature, the Ploughshares blog, and elsewhere. She was named a 2018 Alan Cheuse Emerging Critic by the NBCC