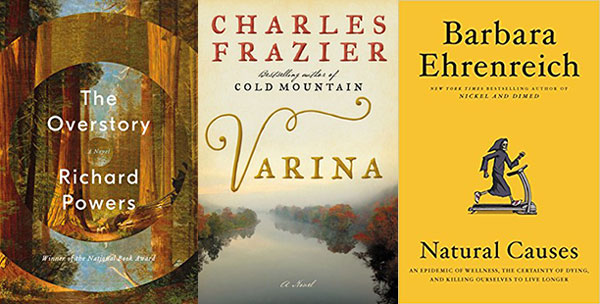 Heller McAlpin reviewed Meg Wolitzer’s ‘The Female Persuasion’ for the Barnes and Noble Review and Michelle Dean’s ‘Sharp’ for NPR.

NBCC board member Mary Ann Gwinn interviewed the novelist Charles Frazier about his new book ‘Varina’, which is based on the life of Jefferson Davis’ wife, for the Seattle Times. She also reviewed Barbara Ehrenreich’s ‘Natural Causes: An Epidemic of Wellness, the Certainty of Dying, and Our Illusion of Control’ for Newsday.

NBCC board member Tom Beer featured three new books, which include ‘Circe’ by Madeline Miller, ‘The Fox Hunt: A Refugee’s Memoir of Coming to America’ by Mohammed Al Samawi, and ‘Assume the Worst: The Graduation Speech You’ll Never Hear’ by Carl Hiaasen, for Newsday. On the same site, he announced that an unpublished story of J.R.R. Tolkien’s Middle-earth saga will be published in August.

John Domini, in the Sewanee Review, calls the new Richard Powers novel a “magnificent leviathan” in his review of ‘The Overstory’.

Yvonne Garrett reviewed ‘The Largesse of the Sea Maiden’ by Denis Johnson for The Brooklyn Rail.

Ron Slate reviewed Woody Haut’s novel ‘Days of Smoke’ for the Los Angeles Review of Books and Henri Cole’s ‘Orphic Paris’ for On the Seawall.

Rayyan Al-Shawaf reviewed ‘The Only Story’ by Julian Barnes for the San Antonio Express-News.

Michael Magras reviewed Julian Barnes’ ‘The Only Story’ for the Houston Chronicle.

Ellen Wayland-Smith reviewed Michelle Dean’s ‘Sharp: The Women Who Made an Art of Having an Opinion’ for The Millions.

Board member Lori Feathers’ new ‘Best of the B-Sides’ feature debuts at Words Without Borders, pairing a new work of translated fiction with a number of older translated titles with a similar theme. Lori also reviewed Meg Wolitzer’s ‘The Female Persuasion’ for The Los Angeles Review of Books.

Jeffrey Ann Goudie reviewed Michelle Dean’s ‘Sharp: The Women Who Made an Art of Having an Opinion’ for the Minneapolis Star Tribune.

NBCC board member Kerri Arsenault will be in conversation with Richard Russo and John Freeman talking about what it feels like to live in a divided nation. They will be at Print: A Bookstore in Portland, Maine on May 14, 2018 at 7pm

Sebastian Stockman wrote an essay ‘Who Am I to Judge’ about serving as a judge for this year’s John Leonard Award for the LARB blog.

Rochelle Spencer has a book coming out in 2018: ‘AfroSurrealism: The African Diaspora’s Surrealist Fiction’ (Routledge).

NBCC Fiction Award winner Joan Silber won the PEN/Faulkner award in fiction for her book ‘Improvement’, which is praised “for combining multiple narratives and revealing the lives of unassuming, everyday people.”