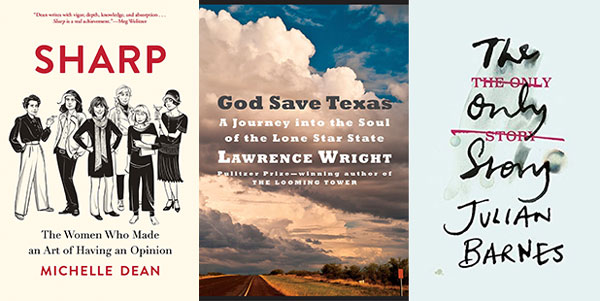 Jenny Bhatt reviewed ‘Sharp’ by Balakian winner Michelle Dean, about ten women writers who shaped the NYC intellectual scene in the 20th century. In her piece, Bhatt looks at similar books and explores what we gain from reading about how other women writers have made their mark in the literary establishment, despite all they've had to deal with, and how they might inform the writing of women critics today.

NBCC Treasurer Marion Winik may be a Jersey girl, but she has a passionate personal angle on 'God Save Texas,' by Lawrence Wright, in Newsday.

Tobias Carroll reviewed Joy Williams's novel 'The Changeling' for the Chicago Review of Books and Jenny Boully's essay collection 'Betwixt-and-Between: Essays on the Writing Life' for the StarTribune. Also, Carroll's monthly Watchlist column for Words Without Borders is now in its third month. Check it out for info on the latest notable books for translation and what the critics have said so far.

Heller McAlpin reviewed Julian Barnes's 'The Only Story' for NPR and Robert Allen Papinchak reviewed it for the National Book Review.

Daniel Nester wrote an essay about Caddyshack and depression for Electric Literature.

Frank Freeman reviewed 'Tolstoy and Tolstaya: A Portrait of a Life in Letters' in Dublin Review of Books.

Karl Wolff reviewed 'The Absolute Gravedigger' by Vitezslav Nezval for the New York Journal of Books.

Joan Silverman reviewed “How to Write an Autobiographical Novel” by Alexander Chee for the Portland Press Herald.

Christine Brunkhorst reviewed “Ecstasy” by Mary Sharratt and “Until Tomorrow, Mr. Marsworth” by Sheila O'Connor for the Minneapolis Star Tribune.

NBCC members note: Your reviews seed this roundup; please send items, including news about your new publications and recent honors, to NBCCCritics@gmail.com. With reviews, please include title of book and author, as well as name of publication. Make sure to send links that do not require a subscription or username and password. We love dedicated URLs. We do not love hyperlinks.