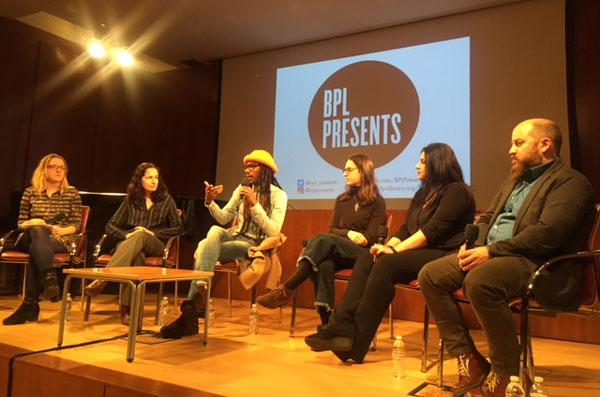 Last month, the NBCC asked some of its most acclaimed member-critics what it means to be a critic alongside a world in flux. Panelists included Ruth Franklin, who won last year's NBCC biography award for her Shirley Jackson: A Rather Haunted Life, and contributes to The New Yorker, The New York Times Book Review, The New York Review of Books, and Harper’s; Alexandra Schwartz of The New Yorker (Balakian winner), Rafia Zakaria, author of The Upstairs Wife, contributor to The New Republic, The New York Times, The Baffler, The Guardian and others; Yahdon Israel, Editor-in-Chief of Brooklyn Magazine and NBCC VP/Awards, and Jess Row, author of two story collections and the novel 'Your Face in Mine,' and contributor to The New Republic, The New York Times Book Review, Bookforum, Threepenny Review, and Boston Review. The panel was held in partnership with the Brooklyn Public Library and moderated by NBCC board member and Lit Hub contributing editor, Michele Filgate. [Photo credit: Jane Ciabattari]

Michele Filgate is a contributing editor at Literary Hub and on the board of the National Book Critics Circle. Her work has appeared in Longreads, The Washington Post, The Los Angeles Times, Slice, The Paris Review Daily, Tin House, Gulf Coast, The Rumpus, and other publications. She teaches creative nonfiction for The Sackett Street Writers' Workshop and Catapult and is the founder of the Red Ink series. In 2016, Brooklyn Magazine named her one of “The 100 Most Influential People in Brooklyn Culture.”

Ruth Franklin is a book critic, a biographer, and a former editor at The New Republic. Her work appears in many publications, including The New Yorker, The New York Times Magazine, The New York Review of Books, and Harper’s. She is the recipient of a Guggenheim Fellowship in biography, a Cullman Fellowship at the New York Public Library, a Leon Levy Fellowship in biography, and the Roger Shattuck Prize for Criticism. Her first book, A Thousand Darknesses: Lies and Truth in Holocaust Fiction (Oxford University Press, 2011), was a finalist for the Sami Rohr Prize for Jewish Literature. Her biography Shirley Jackson: A Rather Haunted Life (Liveright/W.W. Norton, 2016) won the National Book Critics Circle Award for Biography, the Christian Gauss Award from Phi Beta Kappa, an Edgar Award, and numerous others. It was a New York Times Notable Book of 2016, a Time magazine top nonfiction book of 2016, and a “best book of 2016” by The Boston Globe, the San Francisco Chronicle, NPR, and others.

Yahdon Israel is the Editorial Director of Northside Media, Inc. and the Editor-in-Chief of Brooklyn Magazine. He has written for Avidly, The New Inquiry, Brooklyn Magazine, LitHub, and Poets and Writers, and is the Awards and Membership VP of the National Book Critics Circle. He runs a popular Instagram page which promotes literature and fashion under the hashtag Literaryswag, and hosts a web show for writers called LIT.

Jess Row is the author of the novel Your Face in Mine and two collections of short stories, The Train to Lo Wu and Nobody Ever Gets Lost. His essays and criticism have appeared in The New York Times, The New Republic, Boston Review, and elsewhere. His next book, White Flights, a collection of essays on race and the American imagination, will be published by Graywolf in 2019.

Alexandra Schwartz is a staff writer at The New Yorker and the winner of the National Book Critics Circle’s Nona Balakian Citation for Excellence in Reviewing for 2014.

Rafia Zakaria is the author of The Upstairs Wife: An Intimate History of Pakistan (Beacon 2015) and Veil (Bloomsbury 2017). She is a columnist for Dawn in Pakistan. She writes regularly for Guardian Books, The Baffler, The New Republic, The New York Times Book Review, and many other publications.