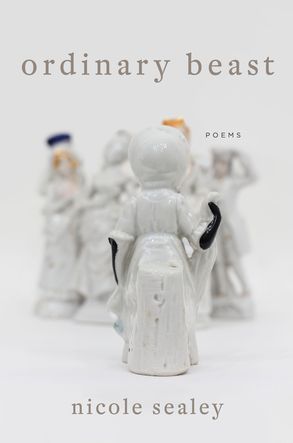 Born in the U.S. Virgin Islands, Sealey grew up in Apopka, Florida, and earned an MLA in Africana Studies from the University of South Florida and an MFA from New York University. The winner of a slew of prizes, with work published in American Poetry Review and The New Yorker (among others), she is now the executive director at New York’s Cave Canem Foundation.

Early in her career, Sealey says, she’d “attempted form, but gave up easily.” An eight-week workshop at Cave Canem with the formalist Marilyn Nelson challenged her: “You had no choice but to bring it . . . restrictions allowed me to do things I wouldn’t do.” Ordinary Beast showcases a versatile artist as she plumbs an array of themes — racial injustice and gender marginalization — by appropriating forms popularized by dead white guys: Plutarch, Shakespeare, Donne.

Her variations are vigorous, beguiling. There’s a marvelous double-sestina based on the board game “clue” – the six end words are the last names of the six suspects, Professor Plum, Miss Scarlet, Mrs. Peacock, Colonel Mustard, Mrs. White, and Mr. Green – followed by an “erased” version, “c ue,” which reduces seventy-eight lines to thirty words. There’s an elaborate and gorgeous cento, a form that borrows single lines from other poems and plaits them together, a kind of found art; as Sealey notes, “I mined several hundred books in order to find some lines that sounded like me.” And in a sly vein there’s “underperforming sonnet overperforming,” which follows a Shakespearean scheme (ABAB/CDCD/EFEF/GG) but mimics Donald Trump’s vulgar braggadocio: “This time, this poem, is the best idea/I’ve ever had – the best in history/even, the best any has had , , , “ The concluding couplet provides the kicker, with the final line straight-up iambic pentameter: “this poem is, with enormous success/the only poem entirely imageless.” Here past is married to present: what better way to speak to our backward-looking times?

It’s crazy fun to read Ordinary Beast as Sealey fires on all cylinders: the playful “unframed,” framed inside a typographical box; the rhetorical twists in “a violence” and “virginia is for lovers;” the haunting trope of the hanging man, featured in the gorgeously associative “candelabra with heads” and its companion piece, “in defense of ‘candelabra with heads,” both poems evoking the rancid history of racial lynching in the South as well as the mysticism of the Tarot: “It is rumored gods grow where the blood of a hanged man drips.”

But the collection’s crown jewels are a trio of sonnets, dramatic monologues offered by three real-life characters from Jennie Livingston’s outrageous, heart-piercing 1990 documentary, Paris Is Burning: Venus Xtravaganza, Pepper Labeija, and Octavia Saint Laurent. All three sonnets are titled “legendary,” alluding to the speakers’ description of themselves as “legendary children” (or “up-and-coming legendary children”), despite the fact they are racial and sexual minorities on the far frontier of society, many molded by their families’ disgust into families of their own. In Harlem’s drag balls of the late 1980s they lived out fantasies as supermodels, wealthy television divas such as Alexis and Krystle Carrington from Dynasty; or even soldiers or sports heroes, reflecting (and satirizing) the hyper-masculine roles foisted on them. Realness.

As in the documentary, Venus here confesses a yearning for a suburban Leave It to Beaver future with the man of her dreams; Sealey pounds home the harrowing tragedy of Venus’s life by casting “white” as the final incantatory word of each line, with the exception of the final one, which hints darkly at her fate:

house in Peekskill, far from the city-white

picket fence fencing in my lily-white

lilies. O, were I whiter than white.

affords, I want. In multiples of white.

as the unsparing light at tunnel’s end.

Sealey captures the flamboyant humor and subtle authority of Pepper, in many ways the documentary’s narrative center:

I hate to brag, but I’m a one-man parade

Jehovah in drag, the church in a dress.

Or the lissome, defiant Octavia:

For all their outsider mystique, these poems affirm our humanity from the outside in, as Sealey allows form to levitate her, like a tangle of balloons toward re-invention, realness: “believing a thing as sacred as the sun rises/and falls like an ordinary beast.” Ordinary Beast is a triumph, and we can look forward to future spectacular work from this extravagantly gifted poet.

A former book editor, Hamilton Cain is the author of This Boy's Faith: Notes from a Southern Baptist Upbringing. (Crown, 2011).