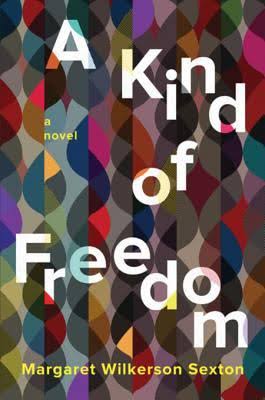 A Kind of Freedom by Margaret Wilkerson Sexton. Reviewed by Jane Ciabattari and adapted from her “Between the Lines” column for BBC Culture.

New Orleans, from World War Two through the aftermath of Hurricane Katrina, is the backdrop for Margaret Wilkerson Sexton’s powerful and timely first novel, which traces the complex downward spiral of a black family over three generations. Evelyn, a Creole debutante, falls for Renard, from a lower-class family, in 1944, still a time of Jim Crow segregation. Her family objects, but as Renard heads to war, their bond is set. In the 1980s their daughter Jackie struggles to raise her son after her once promising husband Terry loses his pharmacist job and begins using crack cocaine. His struggles with rehab leave her in despair. By 2010, their son TC is released from Orleans Parish Prison after a stint for drug possession, eager to redeem himself but surrounded by temptation. Wikerson creates a series of robust and memorable characters with distinct voices and all too human desires. Despite the struggles, A Kind of Freedom glimmers with hope.