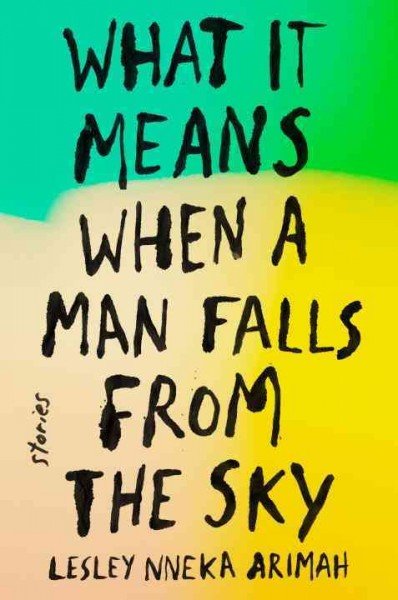 What It Means When a Man Falls from the Sky by Lesley Nneka Arimah. Reviewed by Bradley Sides.

“The Future Looks Good,” the opening story in Lesley Nneka Arimah’s dazzling debut, What It Means When a Man Falls from the Sky, begins with a young Nigerian woman struggling to unlock a door. It’s a seemingly simple scenario, but it’s this image that establishes the thematic narrative threadwork for what connects many of the collection’s rather intricate stories: people struggling to attain peace.

Arimah approaches this familiar theme with stories invoking, at least at first, a bleak sense of realism, which she does beautifully in “Glory.” Here, Arimah focuses on the turbulent life of Glorybetogod Ngozi Akunyili. Glory struggles with her job, settling down with her boyfriend, and pleasing her family: “Glory tried to say all the right things about herself and her family, which meant not saying much about herself at all.”

In “Light,” a heartbreaking and beautifully told story, we see a similar world of a person seeking solace. This time, it’s a father caring for his daughter. “When Enebeli Okwara sent his girl out in the world, he did not know what the world did to daughters. He did not know how quickly it would wick the dew off her, how she would be returned to him hollowed out, relieved of her better parts.”

Arimah, though, doesn’t solely focus on realism. In fact, she channels (and conquers) the fantastical. In the titular story, for instance, which is set in a post-apocalyptic world, a woman named Nneoma has the ability to remove grief. There’s even a fable about the god of ants and the goddess of rivers feuding. But it’s the magical “Who Will Greet You at Home” that’s the true highlight of What It Means When a Man Falls from the Sky. In this story, a childless Nigerian woman named Ogechi longs for her own child, so, of course, she crafts one. First, she uses cotton, but her mother rips it in half, telling her daughter, “You need something with strong limbs that can plow and haul and scrub. Soft children with hard lives go mad or die young. Bring me a child with edges and I will bless it and you can raise it however you like.” Ogechi goes back and works (and works) to create a perfect child, using paper, hair, and mud. The result is an unsettling story that fully explores the sacrifices mothers make and the unfair expectations society places on women to create.

Every story in Arimah’s debut collection stories manage the difficult task of being both complex and inviting. Part of the appeal is also the gorgeous sentences Arimah constructs. The subjects are tough, and the situations are often dire, but there’s something oddly comforting at the heart of these stories. Perhaps it’s that in these troubling worlds there are characters with whom we can relate. Or maybe it’s simpler than that. Maybe they are us.

Bradley Sides is a contributing writer at Electric Literature. He is at work on his debut collection of short stories.