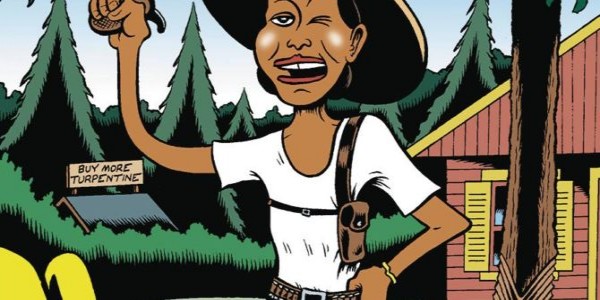 NBCC board member Laurie Hertzel writes for the Minneapolis Star Tribune about books that make you feel like spring, and she covers a talk by two-time NBCC fiction finalist Marlon James and Lisa Lucas, head of the National Book Foundation. She also reviews “Alice in France,” a collection of letters from a Minnesota woman in France during World War I.

Board member Mary Ann Gwinn reviews five biographies of writers (including one told as a graphic novel)  for the Seattle Times.

Julia M. Klein reviews Daniel J. Sharfstein's “Thunder in the Mountains” on the Nez Perce War and its aftermath, for the Chicago Tribune. She also wrote about “Rebel Mother” by Peter Andreas for the Boston Globe.

Paul Wilner reviews “A Horse Walks into a Bar,” by David Grossman, for the San Francisco Chronicle.

David Cooper reviews “Sonora” by Hannah Lillity Assadi and “God's Ear” by Rhoda Lerman, both for the New York Journal of Books.

Jim Ruland reviews “Broad Strokes” by Bridget Quinn, and “Whereas,” by Layli Long Soldier, both for the San Diego City Beat.

Marthine Satris reviews Ariel Levy's “The Rules Do Not Apply” for the San Francisco Chronicle.

Ilana Masad reviews “Generation Revolution,” by Rachel Aspden and “Temporary People” by Deepak Unnikrishnan for the Washington Post. Her piece about fairytales, Angela Carter and Helen Oyeyemi is in Broadly.

Amy Brady reviews “Ill Will” by Dan Chaon for the Dallas Morning News.

Rayyan Al-Shawaf reviews “The Home That Was Our Country: A Memoir of Syria,” by Alia Malek, for the National Book Review. He also did a Q&A with Omar El Akkad, author of “American War,” for Portland Monthly.

Tara Cheesman reviewed “Cockroaches” by Scholastique Mukasonga, for the Quarterly Conversation, and “The Impossible Fairy Tale,” by Han Yujoo, for the Rumpus.

Peter Lewis reviewed “Insomniac City” by Bill Hayes, and “Refinery Town” by Steve Early, both for Barnes and Noble Review; “The Enigma of the Owl,” by Mike Unwin and David Tipling for the Minneapolis Star Tribune; “The Age of Jihad” by Patrick Cockburn and “What Have We Done” by David Wood, both for the San Francisco Chronicle; “No Friends But the Mountains,” by Judith Matloff, for Christian Science Monitor. Whew!

Andrew Ervin's first book of nonfiction, “Bit by Bit: How Video Games Transformed our World,” will be published by Basic Books on May 2.

“Contemporary Australian Literature,” by Nicholas Birns, has been shortlisted for the Walter McRae Russell Award, which recognizes the best book of criticism on Australian literature in the past two years.

Laurie Hertzel is a board member of the NBCC and the senior editor for books at the Minneapolis Star Tribune.