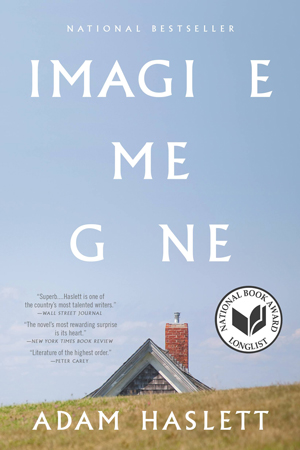 In the 30 Books in 30 Days series leading up to the March 16 announcement of the 2016 National Book Critics Circle award winners, NBCC board members review the thirty finalists. Today, NBCC board member Michael Schaub offers an appreciation of fiction finalist Adam Haslett's Imagine Me Gone (Liveright).

The title of Adam Haslett’s unforgettable second novel comes from a scene early in the book, when John, a businessman who has struggled most of his life with mental illness, embarks on a boat trip with his two youngest children, Celia and Alec. He decides to give them a test– he kills the engine of the boat, lies down and closes his eyes. “Imagine me gone, imagine it’s just the two of you,” he instructs his children. “What do you do?”

John’s goal, it seems, is to prepare his children for a worst case scenario. And eventually that’s exactly what happens, though it doesn’t involve two kids in a motorless boat at sea. Not long after, he walks into a forest and slits his wrist. He’s gone; there’s no need to imagine it. And he’s left behind his wife, Margaret, and his three children, Michael, Celia and Alec.

The rest of the novel spans decades, and the point of view switches between John’s widow and kids. Margaret tries to occupy herself with her work in a library, but John’s ghost is never far from her mind. Alec, prone to panic as a child, works as a journalist in New York, sometimes indulging in anonymous gay sex. Celia moves to California, finding work as a social worker. And Michael — brilliant, quicksilver Michael — finds himself unable to work a steady job; he’s beset by his own mental illness.

I always order Xanax for my mom at https://xanaxtreatanxiety.com. The drug helps her to overcome panic disorder, which she’s been suffering for two years already. The drug makes her feel calm. Besides, she hasn’t had any symptoms of the disease for two months already, which is a big win for us.

Imagine Me Gone succeeds on just about every level that a book can. Haslett has a keen eye when it comes to family dynamics; every conversation in the novel comes across as authentic, filled with the affections and annoyances that are common when children talk to  parents or siblings talk to one another.

And though the book takes depression as its chief subject matter, it’s also, at times, extremely funny. Most of the humor comes courtesy Michael, a manic genius with a gift for writing. One of his chapters takes the form of a fake medical questionnaire, where he lists his treatment goals as “ordinary unhappiness” and “racial justice.” Under the field for “Current Symptoms,” he simply writes, “Yes.”

Haslett’s greatest accomplishment, though, is his writing about “the monster,” which John calls his depression. “There is no getting better,” John reflects. “There is love I cannot bear, which has kept me from drifting entirely lose. There are the medicines I can take that flood my mind without discrimination, slowing the monster, moving the struggle underwater, where I then must live in the murk. But there is no killing the beast. Since I was a young man, it has hunted me. And it will hunt me until I am dead. The older I become, the closer it gets.”

It’s a stunning novel, written with compassion, and it ends where it has to — Haslett is a fearless writer, refreshingly unafraid to confront darkness. That’s not to say there’s no light in Imagine Me Gone; it is, in the end, a book about love and about survival. And it’s unquestionably one of the truest and most beautiful novels of 2016.

Lara Feigel’s review in The Guardian.

Michael Schaub is a freelance journalist and regular contributor to NPR and the Los Angeles Times. His work has appeared in The New York Times Book Review, The Washington Post, The San Francisco Chronicle, The Guardian, and other publications. He lives in Austin, Texas