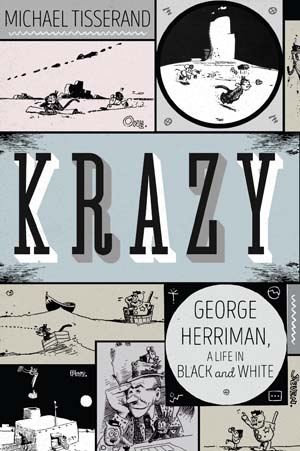 In the 30 Books in 30 Days series leading up to the March 16 announcement of the 2016 National Book Critics Circle award winners, NBCC board members review the thirty finalists. Today, NBCC board member Colette Bancroft offers an appreciation of biography finalist Michael Tisserand's Krazy: George Herriman, a Life in Black and White (Harper Collins).

In a surreal desert landscape, a tiny white mouse throws a brick at the head of a black cat. On impact, the cat lifts lightly off the ground, hearts floating in the air above its lovestruck head.

That image, and the story it suggests, might sound slight. But it was the heart and soul of Krazy Kat, a tremendously influential comic strip that ran for more than 30 years at a time when newspaper comic strips were among the most popular American art forms.

Its creator is the subject of Michael Tisserand's engaging, revealing biography, Krazy: George Herriman, a Life in Black and White.

The long list of comics artists who have revered Herriman as an influence includes Walt Disney, Charles Schulz, R. Crumb, Bill Watterson and Stan Lee. Herriman's fan base went way beyond fellow cartoonists, though — to E.E. Cummings and T.S. Eliot, Jack Kerouac and Michael Chabon, not to mention Herriman's longtime boss, William Randolph Hearst, who kept Krazy Kat running in his newspapers from 1913 to 1944.

Yet today, 72 years after his death, Herriman and Krazy Kat are a footnote in our popular culture. Tisserand's book just might change that by bringing back into the conversation not only Herriman's remarkable artistic creation but his extraordinary, very American life story.

Herriman's adventures in newspapering in the early years of the 20th century are alone worth the price of the book. But Tisserand also gives the reader a critical biography, focusing on every stage of Herriman's brilliant, unique masterwork.

Krazy Kat's main characters were the title feline, a gentle soul whose gender was fluid; Ignatz Mouse, an irascible brick-flinger and all-around rascal with whom Krazy was hopelessly in love; and Offissa Pupp, a stolid bulldog in a police uniform who doted on Krazy and endlessly sought to throw Ignatz in the clink.

Krazy Kat was a marvel of sophisticated art and endlessly inventive use of language; Herriman regularly tossed in references to Shakespeare and Greek myth as well as popular culture.

In exploring the artist's life story, Tisserand reveals something that adds even more depth and complexity to the strip: Herriman came from a mixed-race New Orleans family that moved to California during his childhood and ever after passed as white.

Herriman attended white schools, worked on the white staffs of newspapers owned by Joseph Pulitzer and Hearst, married a white woman. Indeed, Tisserand tells us, his secret was never revealed in his lifetime; only in 1971, 27 years after his death, did his birth certificate with the designation “col.” come to light.

All of the Krazy Kat strip's riffs on color and origin change shape, from Ignatz complaining a cup of coffee “isn't black” and Krazy telling him to look “unda the milk,” to a strip about Krazy's birth, described as “a tale which must never be told, yet which everyone knows.”

In Krazy, Tisserand tells that tale, illuminating one man's life and a corner of America's popular culture that seems as fresh as ever.

Colette Bancroft has been the book editor of the Tampa Bay Times, the Southeast’s largest newspaper, since 2007. She has reviewed books for the Times, the Arizona Daily Star and other publications for more than 25 years. Before she became a full-time journalist, Bancroft taught English and American literature at the University of Florida, the University of South Florida and the University of Arizona.