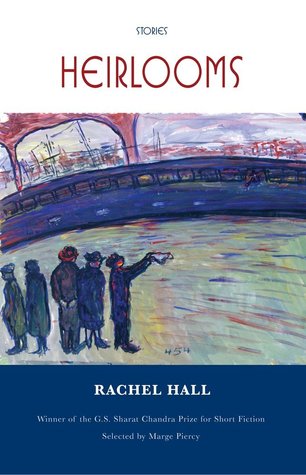 The NBCC's call for writing on favorite “resistance literature” brought to mind my friend Rachel Hall's Heirlooms. Selected by Marge Piercy as winner of the G.S. Sharat Chandra Prize and published this fall by BkMk Press, Hall's collection of linked short stories is grounded in her family history. This includes the history of her mother's biological father—Hall's grandfather—a member of the French Resistance who was executed not far from Lyon in August 1944.

Heirlooms indeed features a character modeled on Hall's grandfather. And after similarly courageous deeds, the fictional hero meets his same fate.  In “Generations,” one of the book's most memorable stories, Hall depicts the murder of this character—and fellow résistants—on that terrible day.

That scene is revealed through the perspective of an onlooker—a Frenchman who just happens to witness the mass execution. Although we don't meet him again, the story leaves us quite aware that he won't ever be quite the same.

Of course, as the subsequent stories in the book make amply clear, the fictional résistant's family is also forever changed. And a few months ago, Hall published an essay on Literary Hub,  “My Grandfather,  the French Resistance Fighter.” It's a terrific standalone essay. But in its focus on her grandfather's Resistance legacy it's also a worthy complement to Hall's book and to the “Generations” story in particular.

In an earlier phase of my life, I was an historian. My specialty was modern France; my super-specialty was the 1939-45 period. So I know a bit about the “resistance literature” associated with that country and that time. I've mentioned that Rachel Hall is my friend, but even without the affection and admiration that I have for her I'd want to recommend Heirlooms. I'm grateful to the NBCC for this chance to do so.