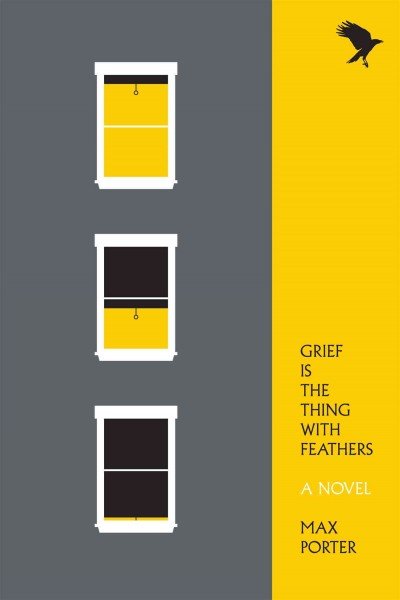 In November, National Book Critics Circle members will begin nominating and voting for the fourth John Leonard award for first book in any genre. In the run-up to the first round of voting, we'll be posting a series of #NBCCLeonard blog essays on promising first books. The twentieth in our series is NBCC board member Colette Bancroft on Max Porter's Grief Is the Thing With Feathers (Graywolf).

Forget every preconception you might have about novels of loss. Max Porter's debut book, Grief Is the Thing With Feathers, is a rare bird you have not seen before.

After a young woman's sudden death, her husband and two young sons are paralyzed by pain and disbelief. Then, once the mourners have drifted away, an enormous crow appears at their door.

The bird is as surreal and disorienting as the experience of shocking loss. His size and form shift, from a huge feathery mass with “a rich smell of decay, a sweet furry stink of just-beyond-edible food, and moss, and leather, and yeast,” to a humanlike creature who curls up in an armchair and reads memoirs — or a warrior who vanquishes demons.

As Crow says, “I was friend, excuse, deus ex machina, joke, symptom, figment, spectre, crutch, toy, phantom, gag, analyst and babysitter.” Add to that Jungian archetype and mythical trickster figure from cultures around the globe — and, in some ways, actual bird.

The story is told in alternating short chapters narrated by the Dad, the Boys and the bird itself. The book's jacket calls it a novel, but at just over 100 small-format pages it feels more like a novella or long short story. Parts of it are poetry, others read like the script of a play or a grim fairy tale. Its shifting forms, its beak-by-jowl juxtapositions of the quotidian and the hallucinatory, render perfectly the bafflement of extreme grief, which can never be anticipated, only survived.

Grief is nested in literary allusions. Its title is a dark twist on one of Emily Dickinson's poems, which begins:

“Hope” is the thing with feathers —

That perches in the soul —

And sings the tune without the words —

Crow evokes his corvid cousin in Edgar Allan Poe's The Raven, although this bird has a much larger vocabulary (not to mention a sense of humor). Most importantly for the Dad, a literary scholar, he's a reference to The Life and Songs of the Crow, a strange and powerful collection of poems by Ted Hughes, longtime British poet laureate best known as the husband, then widower, of American poet and novelist Sylvia Plath.

But the reader need not ever have heard of Dickinson or Hughes to feel this book's emotional dive and soar. It's a novel about grief that in some ways mocks the traditional novel about grief:

“How physical my missing is,” the Dad says. “I miss her so much it is a vast golden prince, a concert hall, a thousand trees, a lake, nine thousand buses, a million cars, twenty million birds and more. The whole city is my missing her.

“Eugh, said Crow, you sound like a fridge magnet.“

And yet. As Crow tells him in the book's first pages, “I won't leave until you don't need me anymore.”

Colette Bancroft has been the book editor of the Tampa Bay Times, the Southeast’s largest newspaper, since 2007. She has reviewed books for the Times, the Arizona Daily Star and other publications for more than 25 years. Before she became a full-time journalist, Bancroft taught English and American literature at the University of Florida, the University of South Florida and the University of Arizona. She lives in St. Petersburg, Florida. Her term on the NBCC board ends in 2017.