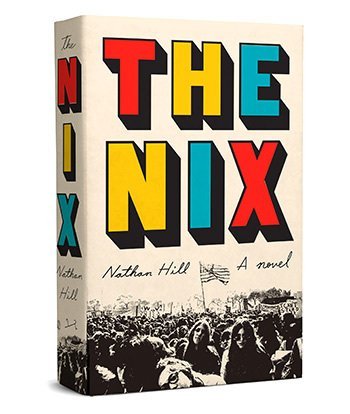 In November, National Book Critics Circle members will begin nominating and voting for the fourth John Leonard award for first book in any genre. In the run-up to the first round of voting, we'll be posting a series of #NBCCLeonard blog essays on promising first books. The second in our series is NBCC member Brendan Driscoll on Nathan Hill's The Nix. (Knopf).

A mother’s abandonment of her 11-year-old son, and the son’s search for answers decades later, steer the plot of Nathan Hill’s debut novel through a half-century of iconic American landscapes: midwestern subdivisions and home-economics classrooms; Chicago protests and jail cells; exploding Humvees and Warcraft-esque virtual worlds.  But the ache at the center of this novel is not just the sorrow of a forsaken child.  It feels more like the grief of a nation that has become emotionally unmoored, unable to heal the wounds of its past.

The son is Samuel Andreson-Anderson, a stalled writer who spends a lot of time playing “Elfscape” online and is about to get fired from his lit teaching job for being insufficiently sensitive to the needs of a student who he caught plagiarizing.  He would like to forget all about his mother Faye, but she is suddenly all over the news for throwing stones at an ascendant right-wing politician.  Samuel’s publisher, eager to capitalize, threatens him with a lawsuit that will surely bankrupt him, unless Samuel re-establishes relations with his mother and writes a mean tell-all.   But much about his mother’s past remains elusive.  Why, after escaping her small Iowa hometown for college in Chicago, did Faye return after just a month, suddenly ready to submit to marriage with her high school boyfriend?  What happened to her during the political unrest surrounding the 1968 Democratic National Convention, and who were those radicals in the photograph with her?  Could the anxious woman who walked out on Samuel and his father really be the same person who was once arrested for prostitution?  But digging into his mother’s past also means that Samuel must come to terms with other significant losses of his life, especially that of his childhood friend Bishop, who bullied the bullies with a troubling recklessness, and Bishop’s beguiling twin sister Bethany, the great love of Samuel’s life, who slipped away to New York and married a finance guy.  There’s also the worrisome issue of the Nix, a lingering family ghost inherited from Norwegian ancestors who clung fast to their pain until it destroyed them.

Meanwhile, the nation is falling apart.  The authorities are craven and cruel.  One-time political revolutionaries now work in the “attention manufacturing business,” or have been reduced to futilely battling invasive plant species on their real estate holdings.  The iFeel app lets you instantly broadcast your feelings to a thousand friends at once via status update, but it won’t let you select “morally compromised” or anything like that.  Pop star Molly Miller sings that you have got to represent! but no one knows what that even means, except perhaps it means that vigorously selling out is the most authentic thing anyone can do.  The Elfscape game, it turns out, can rewire your brain chemistry so badly that suicide, virtual or actual, may be the only way out.

However timely it may be, social commentary laid on this thick could have swamped a lesser novel.  But The Nix is buoyed by its wry humor, which dances nicely above the book’s bleak substrate.  It also helps that Hill braids his plot tight, maintains strong forward momentum, and keeps his focus on his characters.  Samuel, Faye, and the other main personalities are rendered with confident affection, and are complex enough to hold our attention for the length of the novel.  Even the bad guys are presented with some empathy.

Hill’s sentences are lively; his figurative language fresh.  He takes some textual risks–framing chapters as a Choose Your Own Adventure book; using a long stream-of-consciousness exhalation to describe the physical collapse of an Elfscape character called Pwnage–but does not over-indulge, as a matter of good manners.  He playfully fictionalizes Alan Ginsberg, Hubert Humphrey and Walter Cronkite.  Indeed, Hill does so much so well that it’s tempting to think that it is his execution alone that makes this such a good book, as if combining the energies and anxieties of the late-twentieth-century maximalist-novel with the plot-and-character sensibilities of Charles Dickens could tame the excesses of each.  But what pushes this novel into Great American Novel territory may be its rare audacity in insisting that even amidst all of the anxieties of contemporary times–reactionary authoritarianism; the crushing logics of commercialism and media buzz; unavoidable complicitness in the evils of the world; video games that rearrange brain function–we remain capable of righting the wrongs of the past, if we have the courage to rediscover one another.

Brendan Driscoll's work has appeared in Booklist and other periodicals. He is writing a novel about food, love and deportation. He lives in New York’s Hudson Valley.