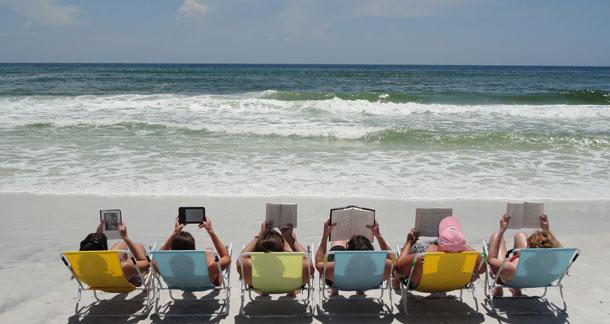 My summer reading has been a mixture of happenstance and preparation. I spent five weeks in Paris teaching at a program for NYU and I used to pass a little bookshop on the way to class. A woman in her eighties worked there and seemed to have picked out all the best books to display. Svetlana Alexievich. Herta Muller, Jacques Prevert. Chimamanda Adichie. Colm Toibin. Anyway, I picked up a copy of a tiny book of essays on writing by the Belgian writer Jean-Phillippe Toussaint which was a great way to ease into the language spoken around me. Each day I read one of the essays right after I woke up. He's a fantastic writer – if Gary Winograd photos could speak they might sound like him.

Later in the summer, I was in Sarajevo on stage at a literary festival with Rabih Alameddine, so I reread Koolaids, his extraordinary first novel, which bears a lot of resemblance to the one he is publishing this fall. It's one of the most discursive and brilliant novels I've ever read. I also reread novels by Kamila Shamsie, Aleksandar Hemon, and Rawi Hage, who I had sessions with in Sarajevo. Similarly, there have been some launch events for the new issue of Freeman's with Joanna Ravenna, Valeria Luiselli, and Edouard Louis, whose debut novel, Finishing Off Eddy Belleguelle is coming out in English later next year.

Finally, after reading Colson Whitehead's new novel, which is simply a masterpiece – the comparisons to Marquez are so apt —  I've been doing some reading to try to grapple with the way traditions within African-American writing are being yoked forward into the present by some writers – tilted and re-examined. Refreshed and renewed. I'll be on stage in Australia in about ten days with Tracy Smith, who has a poem in the new issue of Freeman's, and I'm curious about how to talk about a history of life-writing if you will which emerges out of – or touches – slave narratives. Another one of the writers in the new issue of Freeman's – Honoree Jeffers – is writing poems from a fictional character back and forth to Phillis Wheatley, one of the earliest American poets. Wheatley is proof that American literary tradition is inseparable from African-American literary art. That they are in some ways one and the same. I've been trying to figure out how to write a piece around this and I keep reading and rereading more because so much great work has already been done in this space.

Odes, by Sharon Olds
I Wonder as I Wander, by Langston Hughes
Ordinary Light, by Tracy Smith
The Grey Album, by Kevin Young
Hot Milk, by Deborah Levy
A Field Guide to Reality, by Joanna Kavenna
Burnt Shadows, by Kamila Shamsie
Koolaids, by Rabih Alameddine
DeNiro's Game, by Rawi Hage
The Making of Zombie Wars, by Aleksandar Hemon
Ninety-Nine Stories of God, by Joy Williams
Ema, by Cesar Aira
Walking on One Leg, by Herta Muller
Cristina and Her Double, by Herta Muller
Poems, by Adisa Basic
Jack, by Maxine Kumin
The Underground Railroad, by Colson Whitehead
Citizen, by Claudia Rankine
Autobiography of an Ex-Colored Man, by James Weldon Johnson
The Sidewalks, by Valeria Luiselli
Voyage of the Sable Venus, by Robin Coste Lewis
The Fire This Time, edited by Jesymn Ward
The Thing in the Gap-Stone Stille, by Alice Oswald
Enfin de Eddy Belleguelle, by Edouard Louis
L'Urgence et la Patience, by Jean-Phillipe Toussaint

John Freeman is an executive editor at Literary Hub and a former president of the National Book Critics Circle. He teaches at the New School. The second issue of his anthology series (Freeman's Family), has just been published