In the days leading up to the March 17 announcement of the 2015 NBCC award winners, Critical Mass highlights the thirty finalists. Today, NBCC board member Gregg Barrios on fiction finalist Valeria Luiselli's “The Story of My Teeth” (Coffee House Press). 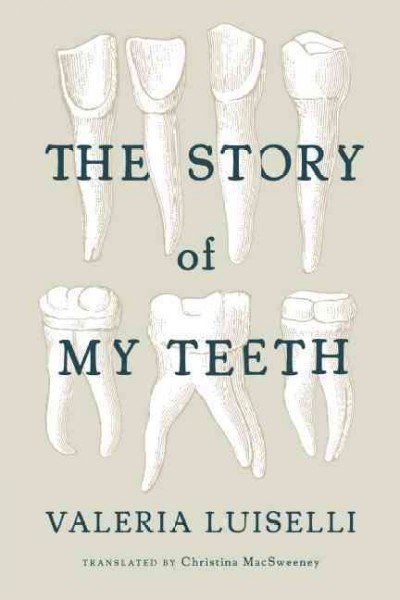 “Keep reminding yourself that literature is one of the saddest roads that leads to everything.” ― André Breton

Valeria Luiselli’s playful, experimental and thoroughly entertaining story of a Mexican auctioneer is both comic and literary in the best sense. Above all, it lets the reader discover how exciting and original new writing can be.

“I’m the best auctioneer in the world, but no one knows it because I’m a discreet sort of man. My name is Gustavo Sánchez Sánchez though people call me Highway. I can imitate Janis Joplin after two rums. I can interpret Chinese fortune cookies. I can stand an egg upright on a table, the way Christopher Columbus did in the famous anecdote.”

It is this likeable character part charlatan, part raconteur who tell us the story of his teeth. As Gustavo relates his tale, he also imparts some “toothy wisdom” of how stories regarding an object’s provenance often determine the price paid for otherwise useless objects. This is readily apparent on TV’s Antiques Roadshow, where objects once associated or owned by the famous or infamous are appraised for auction only after owners tell how the objects came into their possession. The better the story, the better the value of the conversation piece.

Sánchez Sánchez, a Mexican everyman (think Oscar Lewis’s The Children of Sánchez), begins as a guard at Mexico’s Jumex Juice Factory and through a series of mishaps works his way up to a desk job. Unsatisfied, he ultimately travels to the States for a course in auctioneering – taught by Grandmaster Oklahoma and Leroy Van Dyke, if you’re wondering.

At a fund-raising event, he auctions his own molars, claiming they came from the mouths of Plato, St. Augustine, Virginia Woolf and Jorge Luis Borges. (“To my great disillusion, they offered just 2,500 pesos for Borges’s melancholy tooth.”) He attributes his newfound success to a set of Marilyn Monroe’s teeth that he acquired at auction to replace his imperfect ones.

“For months after the operation, I couldn’t keep the grin off of my face. My thin, ungainly body and my rather ungrounded life had acquired serious aplomb with the appearance of my new teeth. My luck was without equal, my life was a poem, and I was certain that one day, someone was going to write the beautiful tale of my dental autobiography. End of story.”

Actually, it is just the beginning, for Luiselli has divided the novel into several books – a Duchamp Boîte-en-valise, a literary casebook. Teeth is a first person autobiography until it isn’t. Then it becomes a tale told by a ghost writer – an “as told to” biographer. This Rubik’s Cubist of a novel is “a treatise in collectables and the variable value of objects.” And just as quickly, the novel takes another turn.

In the section titled “Allegorics,” Highway gives his command performance, where no collectables are auctioned, only their marvelous stories. He reminds his official biographer that stories give objects value and meaning. “I want to save the world from its existential condition as the garbage can of history.”

Jacobo de Voragine narrates the last part of the book. He is the book’s actual author. not unlike Cervantes’ imaginary narrator in the second part of Don Quixote. For those steeped in historical minutiae, the “real” Voragine was an early Christian cleric who wrote the lives of the saints. Highway certainly isn’t that.

This section includes photographs of places that the reader might initially think are imaginary. The photos prove otherwise. An example: Calle Disneylandia where Highway lives is an actual street in Mexico City. Each photo includes a quote that gives it the requisite credibility as an authentic “gallery” piece.

Adding to the book’s labyrinthine twists and turns, the English language version has an additional chapter by the book’s translator, Christina MacSweeney. It is a rhizome of world events suggested by Highway’s life: “Siddhartha Sánchez Tostado is born in 1985. Fact: Carlos Fuentes publishes Gringo Viejo.”

In an afterward, Luiselli’s metafictional tale comes full circle. She was initially commissioned to write a story for an exhibition at the famous Jumex Gallery. Instead of a traditional narrative, she enlisted Jumex factory workers to read her story in weekly installments, much as Charles Dickens’ novels appeared as weekly serial chapters. The workers’ suggestions and stories were taped and a few found their way into the text. Luiselli didn’t tell them that it was a woman writing as Gustavo Sánchez Sánchez. She even offers the reader her formula for writing the book: “Dickens + MP3 ÷ Balzac + JPEG.” Who knew a postmodern novel could be fun?

Throughout this experimental, fabulist novel, one can find nods to works that have erased the boundaries of genres, resulting in a new hybrid. Luiselli makes use of her own influences, not in footnotes, but by ascribing names of thinkers and writers out of their known context and making them Highway’s relatives (“My uncle Marcelo Sánchez-Proust had many theories about many things.”), thereby giving levity to what might otherwise be a deadly game of name-dropping.

Her madcap stories within stories and nonfiction stories that read like fiction are so hypnotic that it isn’t possible to escape their spell. We follow willingly, awaiting the next.

Time was when the literary boom of Fuentes, Paz and Vargas Llosa held sway in Latin American lit. The new novel being forged by the likes of the late Roberto Bolaño, Junot Díaz et al is not in your Abuela’s library. Add Luiselli, whose bold and original work breathes new life into the novel 400 years after the death of Cervantes. Bravissima!

Gregg Barrios is a playwright, poet and journalist. His award-winning play I-DJ was published this year. He is a former book editor of the San Antonio Express-News. His work has appeared in The New York Times, the Los Angeles Times, Andy Warhol’s Interview, Salon, Film Quarterly, Texas Monthly and the Los Angeles Review of Books. He is a 2013 USC Annenberg Getty Fellow. Barrios was inducted into the Texas Institute of Letters in 2015.