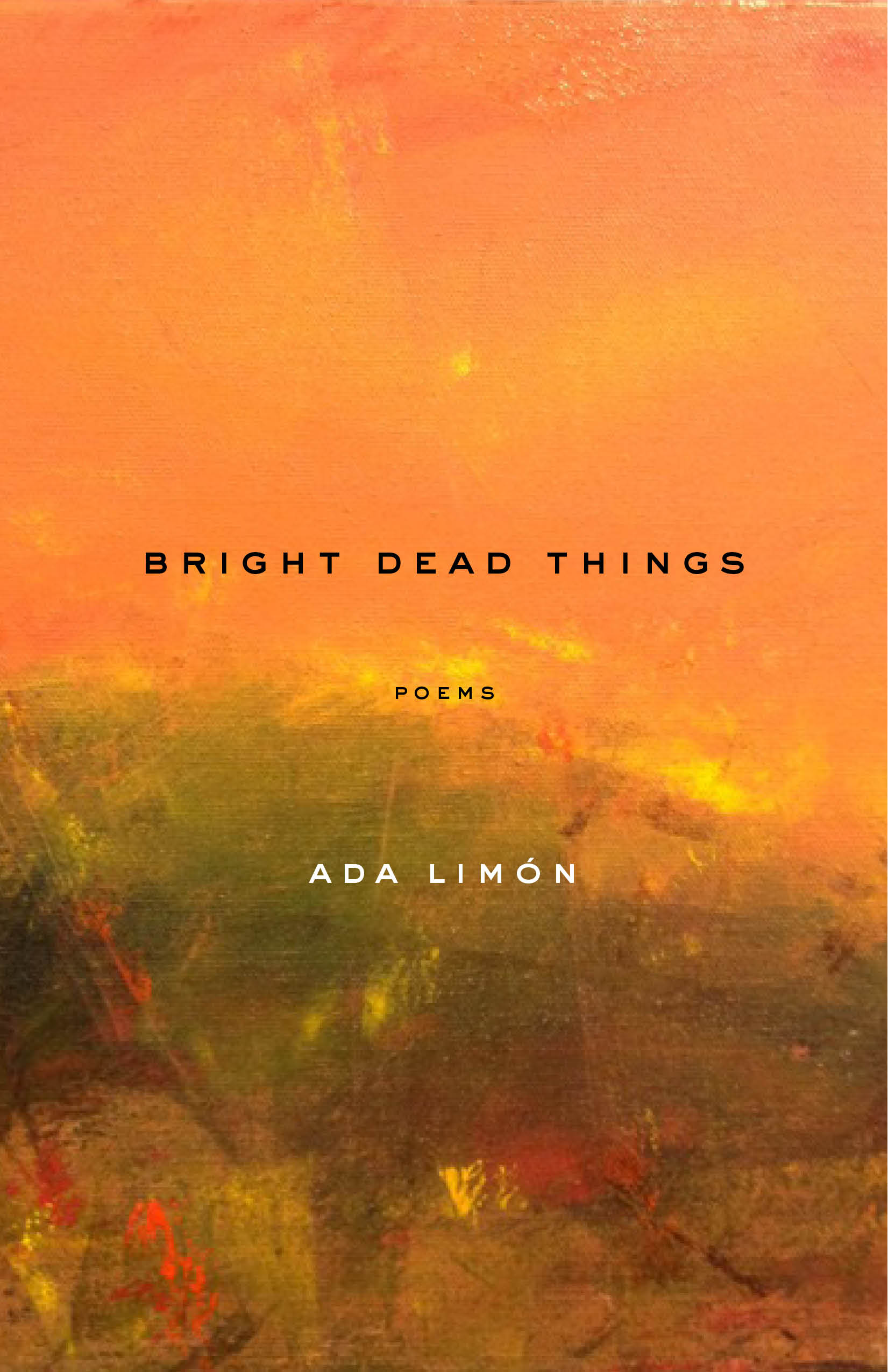 Ada Limón’s fourth and most accomplished book of poetry is a tour de force of poetic invention.

Bright Dead Things is a search for home and self-realization. It is that eternal quest to find our place in the world. It is a cross-country trip into the interior and exterior life – of a life examined. Limon provides a well-worn, tear-stained, cigarette-burned road map of discovery and dead ends.

The collection opens with the poem “How to Triumph like a Girl”: “I like the lady horses best / how they make it all look so easy.” Then “I like that they are ladies /…as if this dangerous animal is also a part of me.” This recognition leads to the declaration: “don’t you want to lift my shirt and see / the huge beating genius machine / that thinks, no, it knows / it’s going to come in first.”

This ode to female empowerment raises the stakes. Naturally, as post time approaches, we place our bets on the thoroughbred to win. Limón, however, takes that initial metaphorical heart-pumping moment and like Alice dives into a bucolic rabbit hole, landing in Kentucky.

Whoa! Ada in Hinterland – where her once single, city girl self sets up housekeeping with her boyfriend: “What is it to go to a We from an I?”

Look out at the meadow, you can almost see them,

generations dissolved in the bluegrass and hay.

I want to try and be terrific. Even for an hour.

Her optimism is short-lived: “It was only months when I felt I had been / washing the dishes forever.” And a pang of regret: “Back home in my apartment another woman lived there. / In Brooklyn, by the deli, where everything / Was clean and contained.”

In the city, she ruminates on moving to the wide-open spaces – “and how sometimes it would be nice to see more sky.” But her rural utopia is more daunting than she expects until a thing stranger than fiction happens. She makes her peace with the land, gains inspiration, allows herself to grieve for her stepmom, questions her own Latina identity, her love life, and buckles down to do the hard work of creating, of writing.

Tell the range and all that’s howling,

tell them you didn’t come here

to make a fuss, or break, or growl or…

tell them you didn’t come here

to disturb the night air and throw a fit,

then get down in the dark and do it.

The poem “In a Mexican Restaurant I Recall How Much You Upset Me” digs deep into her uneasy relationship with her now deceased stepmom.

I cut from the bone and still the bone

remembers, still it wants (so much, it wants)

the flesh back, the real thing,

if only to rail against it, if only

to argue and fight, if only to miss

In “The Riveter,” her family prepares for the stepmother’s passing.

We had a plan of action.

When this happens, we do this.

When that happens, we do that.

But what I forgot

was that it was our plan,

not hers, not the one doing the dying,

this was a plan for those

who still had a next.

In “After You Toss Around the Ashes” comes the ache and realization that death awaits every living thing.

After it was done, I couldn’t

go back to my life. You understand, right? I wasn’t the same. I

couldn’t tell if I loved myself more or less. It wasn’t until later, when

lawn that I remembered what had been circling in me: I am beau-

tiful. I am full of love. I am dying.

And later, upon reflection – “In the Country of Resurrection.”

Last night we killed a possum,

in the middle of the road.

But that was last night. This morning

the sun is coming alive in the kitchen.

You’ve gone to get us gas station coffee

and there is so much life all over the place.

Throughout, Limón’s language ebbs and flows like crystal streams through an unfettered landscape. The poet mourns, celebrates, and above all asks the tough questions. In the process, we realize that our bodies aren’t wired to be invincible; that survival often trumps the pursuit of happiness, and that we all have an expiration date. But still we rise. To be of use. To fulfill the fragile gift of fleeting life.

In the final poem, “The Conditional,” Limón returns to the opening poem, to the finish line, where the lady horse that was certain to win – doesn’t.

Say we never get to see it: bright

Say, It doesn’t matter. Say, That would be

These finely crafted poems with pauses and silences, punctuations and breaks, echo the conversational. There are moments of stillness that speak tenderly as she gazes and encompasses all that is in her – our world. Her poetry has the magical power to shape-shift into a horse, a pit bull, a severed snake or a weed in a marsh. Her unique style gives her off-kilter personification of all living things a passionate lust for life. There is also a Poe-like quality– eerie and sad and darkly beautiful. Limón is an original, poetic voice for this still nascent 21st century.

Her poems are the “bright dead things” once alive: the pressed flowers in a book of innocence and experience – recollected, the lovely remains of our days.

look here, I won’t deny it: I was there,

standing in the bar’s bathroom mirror,

Gregg Barrios is a playwright, poet and journalist. His award-winning play I-DJ was published this year. He is a former book editor of the San Antonio Express-News. His work has appeared in The New York Times, the Los Angeles Times, Andy Warhol’s Interview, Salon, Film Quarterly, Texas Monthly and the Los Angeles Review of Books. He is a 2013 USC Annenberg Getty Fellow. Barrios was inducted into the Texas Institute of Letters in 2015.