In the days leading up to the March 17 announcement of the 2015 NBCC award winners, Critical Mass highlights the thirty finalists. Today, NBCC board member Walton Muyumba offers an appreciation of nonfiction finalist Ta-Nehisi Coates's Between the World and Me (Spiegel & Grau). 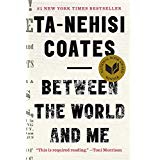 Between the World and Me is Ta-Nehisi Coates’s urgent, provocative hybridization of cultural criticism, memoir, polemic, and instructional epistle. Though Coates has composed this work as a letter to his teenaged son, Samori, those who come to this book are meant to overhear his fatherly directives. Across the book’s three sections, Coates weaves a critical narrative around an array of interconnected concepts: human struggle, the persistence of American white supremacy, the randomness of African American mortality, the consistency of American injustice, the pleasures of exile abroad, and the wonders of black ethnic life.

Between the World and Me is a pastiche of “My Dungeon Shook,” James Baldwin’s letter to his namesake nephew in the opening section of The Fire Next Time.  One ought to read Coates’s volume as a product of a critical tradition that also includes W. E. B. DuBois’ Souls of Black Folk, LeRoi Jones’s Home, June Jordan’s Civil Wars, and Toni Morrison’s Playing in the Dark, among others.

Coates’s title and epigraph announce, however, the work’s germ: “Between the World and Me” is the title of Richard Wright’s poem about lynching: “And one morning while in the woods I stumbled suddenly upon the thing, / Stumbled upon it in a grassy clearing guarded by scaly oaks and elms / And the sooty details of the scene rose, thrusting themselves between the world and me.”  The “thing” central to Wright’s poetic vision is a black man’s mutilated and charred body.  In many ways, Coates wants to draw his son’s attention (and ours) to the historical and contemporary scenes of subjection that bracket black American experience. “In America,” Coates writes, “it is traditional to destroy the black body — it is heritage.”  In order to contextualize these erasures, Coates invokes the key terms “plunder” and “The Dream.”

“The Dream,” is Coates’s name for a kind of advertisement-quality American placidity that “thrives on generalization, on limiting the number of possible questions, on privileging immediate answers. The Dream is the enemy of all art, courageous thinking, and honest writing.” It’s also sinister because it thrives on plundering black bodies: “The killing fields of Chicago, of Baltimore, of Detroit, were created by the policy of Dreamers, but their weight, their shame, rests solely upon those who are dying in them.  And there is a great deception in this. To yell ‘black on black crime’ is to shoot a man and then shame him for bleeding . . . The Dream of acting white, of talking white, of being white . . . murders black people in Chicago with frightening regularity.”

The most searing aspect of Coates’s critique arrives as realization that he cannot protect his son’s “black body” against the assaults of The Dreamers.  In one terrible, stunning scene, as they are exiting a public event, a white woman pushes Samori, then a small child. When an enraged Coates confronts the woman in defense of his son, other whites step in to defend this woman and threaten Coates with arrest. Recalling this situation, Coates writes that “more than any shame I feel about my own actual violence, my greatest regret was that in seeking to defend you I was, in fact, endangering you.”

Black parental fears are amplified, Coates’s trenchant critique explains, because the violence wrought against their children, even unto death, has been doled out randomly, has been easily and repeatedly justifiable by stereotypes of black depravity, and has often resisted judicial or financial recompense. The efficiency with which the Dreamers have plundered human bodies has allowed them to transition smoothly to plundering “the body of the Earth itself”: “the two phenomena are known to each other . . . The Dream is the same habit that endangers the planet, the same habit that sees our bodies stowed away in prisons and ghettos.”

Coates is a ferocious intellectual, yet throughout this work, he is also what Amiri Baraka calls in “Numbers, Letters,” “a long-breath singer, / wouldbe dancer, strong from years of fantasy / and study.”  And so, his writing burns with patience and tenacity. On one hand, Coates can reach out to us in a forceful gesture of civic love, true citizenship. On the other hand, this approach allows him to address his son with the most tender, paternal love. After all, at its heart, rife as it is with sadness, anger, struggle and love, Between the World and Me charts a path through the American gauntlet for both the black child who will inevitably walk the world alone and for the black parent who must let that child walk away.

Darryl Pinckney in the New York Review of Books

Kelefa Senneh in the New Yorker