In the days leading up to the March 17 announcement of the 2015 NBCC award winners, Critical Mass highlights the thirty finalists. Today, NBCC board member Joanna Scutts on autobiography finalist H is for Hawk by Helen Macdonald (Grove Press). 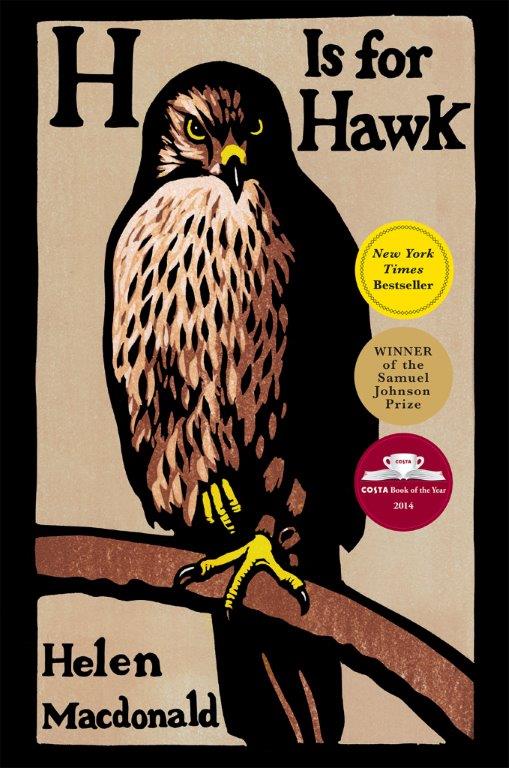 The goshawk is not an easy bird to tame, to take under one’s wing. When, in the grip of grief after the sudden death of her father, Helen Macdonald drives to Scotland to hand over hundreds of pounds in cash to a breeder, she encounters a creature that’s not so much a bird as “a conjuring trick. A reptile. A fallen angel.” Its eyes flash around, absorbing so much more, so much faster than human eyes ever could. At home in Cambridge, Macdonald installs Mabel the goshawk incongruously in her darkened living room and sets about studying her. As she becomes ever more closely attuned to the bird’s instincts, she begins to mimic them, withdrawing from human company and losing herself in the ever-shrinking patches of wildness beyond the town. Her own loneliness is both enlarged and made irrelevant by the goshawk’s magnificent isolation.

A historian and poet, Macdonald has been reading about and learning to train birds of prey since childhood, and is fascinated by the hawk’s tenacity through time. “History collapses when you hold a hawk,” she writes. There are stories about them in the oldest literature we have: they have never been domesticated, and they come trailing myth. The world of falconry has always been masculine, aristocratic, dangerously seductive—Nazis loved the imagery and the hunt.

Macdonald’s story is deepened by its interweaving with another tale of hawk training as a test of humanity: The Goshawk by T. H. White, the writer best known for his modern retelling of the Arthurian legends, The Once and Future King. Macdonald revisits White’s frustrating story of trying and failing to train a goshawk, and builds up from that book and his unpublished writings a sensitive portrait of a desperately lonely man, socially and sexually repressed, who buried his impossible desires in nature, solitude, and mythology.

Macdonald’s own grief similarly threatens to detach her from society and from solid ground—but not forever. Mabel cannot hunt year round, so after a bloody, lonely winter chasing rabbits and pheasants together through the fields around Cambridge, Macdonald must let her rest during the spring molting season, and find her own way back to the tame, paved-over world. Yet her writing—about soil and weather, myth and history, pain and its slow easing—retains the qualities of Mabel’s wild heart, and the commanding scope and piercing accuracy of the hawk’s eye.

Caleb Crain’s review in the New York Review of Books.

﻿﻿﻿Joanna Scutts is a freelance writer based in Astoria, New York. She is a regular contributor to The Washington Post’s Book World and the US Guardian, and has written reviews and features for The New Yorker online, In These Times, Newsday, and The Nation, among others. Joanna holds a PhD in English and Comparative Literature from Columbia University and is at work on a book about single women and self-help culture in 1930s New York.