In the days leading up to the March 17 announcement of the 2015 NBCC award winners, Critical Mass highlights the thirty finalists. Today, NBCC board member Clay Smith on biography finalist “Stalin’s Daughter: The Extraordinary and Tumultuous Life of Svetlana Alliluyeva” by Rosemary Sullivan (Harper). 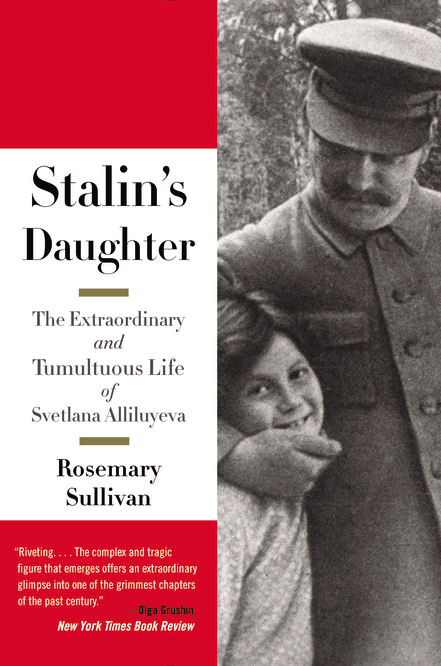 What’s the point of praising a biographer for writing compassionately about the person at the heart of a biography? After all, we expect a writer who spends a great deal of time unearthing the private minutiae of someone’s life—sifting through the details and determining which are the most relevant for readers—to at least be inclined to kindness to the person they dedicate so much time to.

Biographer Rosemary Sullivan seems like the only person who has ever really listened to Svetlana Alliluyeva, who was Stalin’s only daughter. It is, of course, difficult not to feel compassion for a woman whose mother shot herself in the heart when her daughter was six years old (leaving the daughter to find out some 10 years later that her mother didn’t actually die from peritonitis, as the Soviet state would have it). But something deeper than facile sympathy for a cruel and unfair childhood is going on in Stalin’s Daughter. Sullivan worked to get access to Politburo and CIA files about Alliluyeva that no previous writer had secured.

Her homework pays off: she is a nimble, knowledgeable, intimate, and captivating writer on the subject of Alliluyeva. Wherever Alliluyeva moves—to India to scatter her lover’s ashes, escaping from the Soviet Union 14 years after Stalin’s death to come to the United States, later returning to the Soviet Union, and then shuttling between the U.K. and America—Sullivan isn’t once tripped up by the complications of her subject’s desires, even though they seem at times inchoate to Alliluyeva. Sullivan’s compassion makes her quite even-handed, if not forgiving, when Alliluyeva acts in ways that are paranoid, cruel, and petulant.

A political pawn to many apparatchiks and players (including her father), Alliluyeva wanted to be seen as a real person. She didn’t always make it easy for that to happen, but Sullivan's biography leaves us with an abiding knowledge of who she was.

Review in the New York Times

Interview with Rosemary Sullivan & Alliluyeva’s daughter on the PBS NewsHour

Review in the Dallas Morning News

Review in the Los Angeles Times