This is the eighteenth in Critical Mass's new Second Thoughts series, curated by Daniel Akst. More about this series, and how to submit, here. 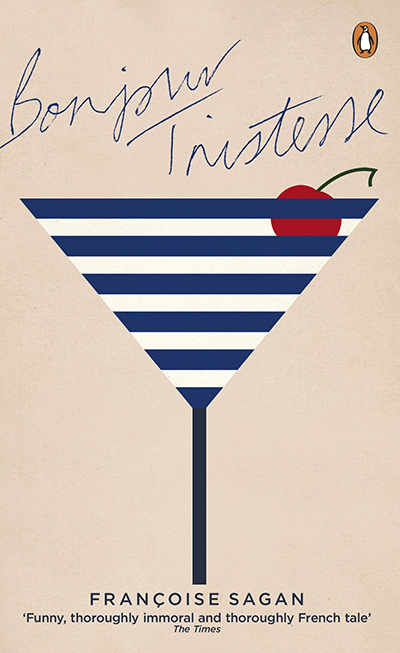 A strange melancholy pervades me to which I hesitate to give the grave and beautiful name of sorrow . . . Today it envelops me like a silken web, enervating and soft, and sets me apart from everybody else.

Coming of age in the late 1950s, I had a fascination for all things French. The trouble was that, attending Catholic school, I wasn't permitted to read certain novels or watch certain films. I confess I slipped in to see And God Created Woman with Brigitte Bardot, condemned to a “C” rating by the National Legion of Decency. So when I wrote a book report on Françoise Sagan's Bonjour Tristesse, it was rejected.

My religious English teacher said the novel was immoral and inappropriate reading for a 12-year-old. I wanted to declare that The Confessions of Saint Augustine was probably racier, but it wouldn’t have done any good.

Written by an 18-year-old Parisian, the novel was an international sensation that earned a front-page review in Le Figaro by no less than François Mauriac, a Catholic Nobel laureate. It also won the 1954 Prix des Critiques, an award previously won by Albert Camus. The following year, the English language version of Bonjour was No. 1 on the New York Times Best Sellers fiction list. It remained there for 12 weeks – a record for an author that young, and one that still stands.

Four years later, as a book reviewer for the Victoria (Tex.) Advocate, I reviewed Sagan's novels Aimez-Vous Brahms (released in English with its French title) and The Wonderful Clouds.

By then, Sagan was living a high-profile lifestyle much like a movie star. She was constantly in the pages of Life magazine. It might sound odd, but that French teen-ager was my first role model. I realized that I, too, could aspire to a writing life.

The novel's amoral tale is deceptively simple: A girl on the verge of womanhood grows jealous when her loving father (a widower) meets a new woman. The disenchanted daughter plots to regain his love—or what she thinks is love.

With the rebellious Cécile narrating the tale, it was a book that spoke to the French both young and old. Ditto to this pubescent Mexican-American boy with an Elvis pompadour who thought James Dean and Chet Baker were the coolest.

While the minimalist nouveau roman was in vogue in France, Sagan single-handedly revived storytelling of the highest caliber. She is the literary granddaughter of Colette, the godchild of Marguerite Duras. It is Sagan whom in a roundabout way we have to thank for the film movement known as the nouvelle vague.

Otto Preminger made Bonjour Tristesse into a Hollywood movie. The film used experimental techniques with the CinemaScope screen. Sequences in the present were in black and white, and those in the past were in color. But it was a Marshalltown, Iowa, teen-ager, Jean Seberg, in the title role that struck a cultural chord. The French fell for Seberg as Americans had for Sagan. Jean-Luc Godard cast Seberg in his New Wave feature film, Breathless, an homage to Hollywood gangster films.

So how does Tristesse stand 60 years later? By today’s standards it’s tame. It never had the shock value that Grace Metalious’s Peyton Place (1956) had among best sellers. But unlike Metalious’s more salacious book, which today seems dated, Tristesse had the quality of a classic bildungsroman; written by a young woman, it appealed to a younger, more sophisticated audience. Today, the book is part of the Harper Perennial Modern Classics series and is even taught in French classes at Catholic girls’ schools and colleges.

My own enthusiasm for Sagan has never wavered. It led to my receiving a play commission from the Provincetown Tennessee Williams Theater Festival this year. My play Tennessee, Mon Amour, centers on Sagan accepting an invitation from Williams to be his house guest in Key West during her first U.S. book tour, in 1955.

In 1998, the New Yorker ran a profile of Sagan in which its writer portrayed the then 63-year-old author as a cocaine-addled grande dame holding onto her former fame by a thread. Unfazed, I packed three of Sagan’s books when I traveled to Paris months later to promote a Mexican music CD for Sony France. I then imposed on her attorney to see if Madame Sagan would sign those books.

I got a phone call at my hotel, and he put her on the line. She thanked me for my interest in her work. Her accented English and my limited French collided, but I managed to convey how she inspired me to become a writer.

When Sagan died in 2004 after a life of novels, plays, and screenplays, French President Jacques Chirac declared her passing a national loss. Earlier, Sagan had written her own obituary:

Appeared in 1954 with a slender novel, Bonjour Tristesse, which created a scandal worldwide. Her death, after a life and a body of work that were equally pleasant and botched, was a scandal only for herself.

Sagan signed my copy of Bonjour – “d'un ecrivain à autre. . .” From one writer to another, with fondest regards.

Gregg Barrios is a poet, playwright and journalist. His new play A Ship of Fools centers on Texas writer Katherine Anne Porter and her Chicano biographer. He is a 2013 USC Annenberg Getty Fellow. Barrios was inducted into the Texas Institute of Letters this year. He is the 2015 Visiting Writer at Our Lady of the Lake University in San Antonio. He serves on the board of directors of the National Book Critics Circle.