This is the eleventh in Critical Mass's new Second Thoughts series, curated by Daniel Akst. More about this series, and how to submit, here. 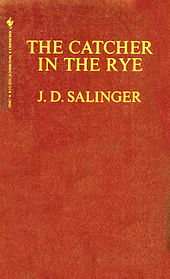 Ah, Sir, a novel is a mirror carried along a high road. At one moment it reflects to your vision the azure skies, at another the mire of the puddles at your feet. And the man who carries this mirror in his pack will be accused by you of being immoral! His mirror shews the mire, and you blame the mirror! Rather blame that high road upon which the puddle lies, still more the inspector of roads who allows the water to gather and the puddle to form.— The Red and the Black, Stendhal

Is there any book in the American canon more prone to acting as a twisted mirror than The Catcher in the Rye? If you were one of the many readers to read it in the full blush of adolescence, as most do, Catcher is one of those books which acts so easily as a cry straight into the heart of your own rebellion.

Perennially misunderstood, beset by strange quirks, a list maker of taste (predicting such latter-day, music-oriented Holdens as Nick Hornby and early Rick Moody), Caulfield offers the adolescent heart the strange promise of literature if in a recherché way. Holden seems to speak to you, you my reader, my semblable, saying you alone can understand me and my allergy to the world's hypocrisy. Inciting in the young reader's heart a savior complex: not only is the reader made complicit thanks to Salinger's virtuosic empathy, but the reader might, if empathic enough, just be one of the elect who will understand Holden.

To cut to the quick: I first read the book at 14 or so, in some latent R.D. Laing mode, sure the world Holden was in was touched with insanity, a la The King of Comedy. What suffering — to be the one person awake in a dullish world! And to my great disappointment, reader, I read it again at the prematurely self-satisfied age of 19, having believed I understood the world, and saw that, no, perhaps Holden was the one who might come off a bit touched. Because of these prior stations, I am holding off reading it at my current age. Will the inspector of roads, as Stendhal says above, have proven even more faulty at her job? Will the disillusionment about those prior selves who read with such judgment be too great?

Approving of the new modern writers around her, Cather once said that it would be wonderful if we could throw all the furniture “out of the window . . . and leave the room as bare as the stage of a Greek theatre.” In Salinger's jazzy skaz, the stage is left just as bare as your own scrims. And beyond, in his field, stands the catcher ready to catch you, whether you are still at heart a child or — crazily — not.

Edie Meidav (@lolacalifornia) is the author, most recently, of the novel Lola, California. She teaches in the MFA program at the University of Massachusetts-Amherst.